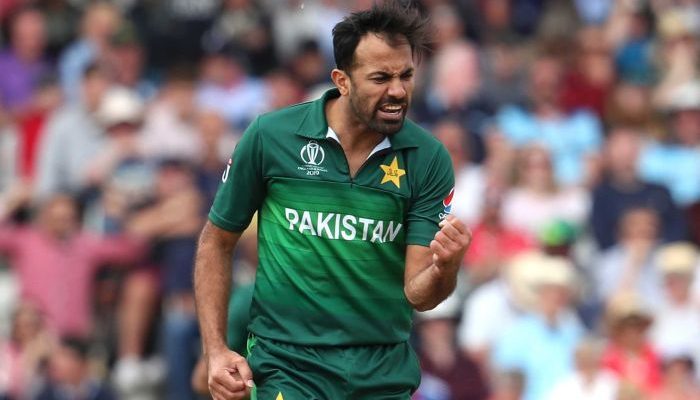 It is difficult to be Wahab Riaz. Among everyone, he cannot afford to go wrong at all. A small glitch and the people are going to start the topic of his selection.

A some call it a fluke while a few call it influence. Whatever it is he has done well so far in the team with eight wickets to his name. Nevertheless, the pressure is always going to be there for him. Well, right from his childhood, he has been in the pressure situation, and most of the times he had come out with flying colours. His team might end up in the losing side still he tries to leave a mark.

In recent times, there isn’t any spell that I found intimidating as the one he produced against Australia in 2015, the spell that is famously called as “Riaz and the Kangaroo Hop”.

“Are you holding a bat?”, asked Watson from the slips when Riaz came into bat on that day. Lesser did he know that in the next 90 minutes, Riaz would make him feel like a tail-ender at the wrong place at the wrong time.

He almost pulled it off for Pakistan that day. An excellent bouncer to welcome Watson and he walked towards him to applaud his fielders. The next one was a similar delivery but faster. The same gesture repeated and the umpire had to warn him. He unsettled Watson, and almost got his wicket, but Rahat Ali dropped a sitter. Maxwell faced the same fate, and this time it was Sohail Khan.

All Riaz could do was to cry in anguish. Had others played with similar intent, Pakistan would have reached the last four in 2015.

Now, the past is past, and Riaz wasn’t a favourite to come into the World Cup. There were a lot of promising youngsters, a lot of bowlers who did well in the road to World Cup, but the selectors opted for him, thanks to his experience and the beautiful bouncers he has.

The Pakistani Bouncers are underrated. The pacers targetted for the yorkers more until Imran Khan came along, but Wasim Akram had the most effective one. Shoaib Akhtar’s is the dangerous one, and Mohammed Sami did well with the short ball too. While a few others come next, Riaz probably has one of the best if not the best bouncers. The impressive control of the line and length at an excellent speed is a treat to watch any day.

Now, that being said, Riaz does have detached days. They are quite a few. He was easily taken for runs. Still, Riaz has the ability to change the entire match with one delivery. The delivery doesn’t have to be a wicket-taking one but the one that will make him regain his confidence. If that happens, he is going to be the toughest to play.

In the World Cup, Riaz did see all of them. He has been taken for runs, he stood up for the team to pick up wickets, he produced impressive bouncers and most importantly, the control in the line and length has helped him to stay economical.

The pressure and the trolls are bringing the best out of him, once again. Though Inzamam has given him the wings to fly high for his dreams, he still has a lot of people to prove wrong. Wrong for writing him off that easily.