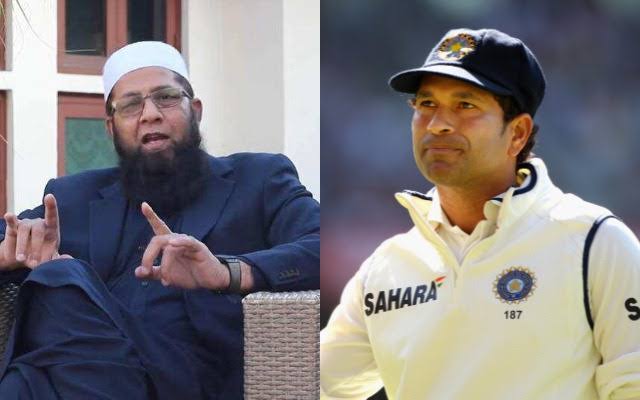 Sachin Tendulkar undoubtedly had many battles with Pakistan when Inzamam-ul-Haq was captaining side. However, former Pakistan cricketer has picked Sachin’s knock in the 2003 World Cup as the best of Sachin.

Inzamam was speaking to R Ashwin in the latter’s show.

“I have asked the same question Sachin paaji but I want to ask you now. In the 2003 World Cup game India and Pakistan, Pakistan had posted a huge score. Saeed Anwar scored a century but after that Sehwag and Sachin played well and India won the match. At the halfway mark did you believe that you have enough to win the match or was the score under par?,” asked Ashwin on his YouTube show ‘DRS with Ash’.

“Our bowling line-up consisted of Wasim Akram, Waqar Younis, and Shoaib Akhtar and the conditions were favouring the fast bowlers. The match was being played at Centurion in South Africa. So we felt that we had put up a pretty good score,” said Inzamam.

“I have seen Sachin play a lot but the way he batted in that match; I have never seen him play like that before. The way he played against our fast bowlers in those conditions was superb. I think he scored 98 before getting out to Shoaib Akhtar.

“I feel that was Sachin’s best innings. He broke all the pressure. He played a top-quality innings against genuine quality fast bowlers like ours. The way he hit those boundaries, the pressure got released on the batsmen who came after him.

“If someone were to ask Sachin, he too would absolutely love that innings of his,” Inzamam concluded.

In the match, Sachin would go on to score 98 before getting to Akhtar. India then had Yuvraj and Dravid finishing off.

IPL2020: Top players Rajasthan Royals might go for in the auction

Couldn’t believe she was 15: Danielle Wyatt on playing with Shafali Verma