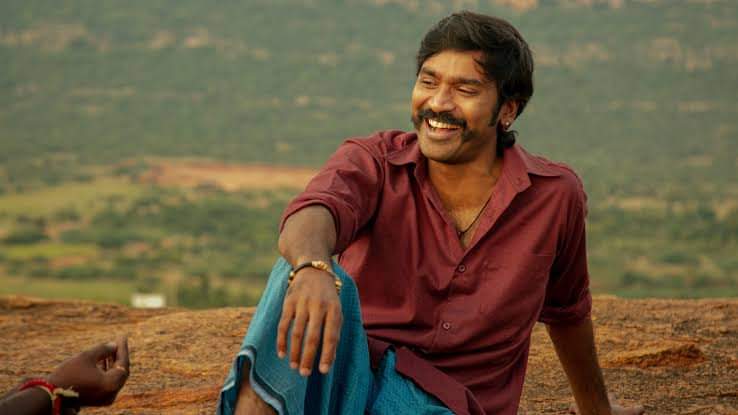 A recurring element, a motif throughout the film keeps depicting the ever-spinning universe that rotates and revolves around its own axis, keeps changing its position to play the same trick every dawn and dusk. No wonder the title of the film translates the same definition. The protagonist, Suruli, he is like the spin-top he plays with, he keeps spinning by any external force that’s exerted upon him. An ignorant, eccentric man, Suruli, is a ruthless, paid killer who faces two powerful gangsters in London.

Karthik Subbaraj knows to catch his audiences by surprise, by effortlessly grabbing their attention. He adheres to the rhythm he’s developed. And You’re hooked in no time. A fan boy in him makes room to keep Ilaiyaraja songs and Rajinikanth’s references to stay rooted and in a way entertain himself too. Maybe that’s enthusiasm drives him forward.

Dhanush, in a introduction scene though which isn’t intended to be cool, fiddles with your curiosity. Peter, a villainous hatemonger, complains about the blood droplets on his cashmere while killing two men in his backyard and it juxtaposes to show how Suruli and Peter are not that different for Suruli complains about the blood on his shirt too. What separates them is that one is aware of the knowledge and the magnitude of his sins while the other doesn’t.

The enjoyable whacky humour and the fine, colourful filmmaking aren’t sadly enough to break the usual stereotype and save it from a hero-glorified Kollywood film. Santhosh Narayanan’s astounding background score elevates the mood. You can’t miss how gorgeous and arresting Shreyaas Krishna’s cinematography is.

Joju George, as Sivadoss, is truly a wonder. His effortlessly admiring performance is so gracious but reduced for very meagre moments. Like Peter and Suruli, the introductory scene Sivadoss gets, is a curious one too. We see his head from the back while he is sitting on a spinning chair. Above his head, you see a board that reads Gods Only. It’s intriguing to know whether Sivadoss calls himself and his men the God, the superiour to anyone, who are only allowed to be there where he is or whether he stands by the right, to serve the right. When Joju effortlessly pulls of the line, “Would you prefer if I aim it higher?” when Peter talks about his superior white race, alas, Joju is a magician who could hypnotise with his performance.

The integrity of the plot is subjected to get questioned even when it’s heart in the right place. It couldn’t escape from the criticism with its overshadowing, fine filmmaking. And what’s still the dire need for this Kollywood director to show the heroine isn’t the mother of the kid who lives with her, to appease who, I ask.

Karthik builds a tensed empire above some unrealistic weakened plot and still is able to achieve the momentum he intends. It finds a dip in its flow and pace where it couldn’t afford to, when Sivadoss meets Suruli at a critical point in the film.

The spinning motif comes at a crucial point of the film when the camera spins and spins around between Sivadoss and Peter while they are facing each other. When the responsibility of Sivadoss falls inadvertently on Suruli, when the latter gets things done in the former’s intended way, Suruli turns the chair and it spins halfway. Towards when the end is near, Suruli spins the globe on his way to finish the business he started. And there is an Christopher Nolan’s Inception inspired scene in which the action sequences are synced using Rajinikanth’s Oruvan Oruvan Mudhalali song, which is quirky and I enjoyed watching it. It still stays a smart wannabe film and not actually making the effort to be actually smart.

Aishwarya Lekshmi shows how good an actor she is. The genuineness in her performance is honest and reliable but it conveniently turns out sombre due to the very little space she has devised, just as the same space she has got in this post.

Simran on working in Tamil Remake of Andhadhun