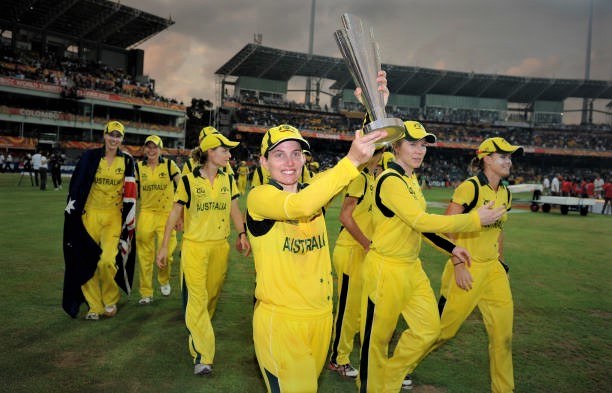 ‘You miss, I hit’.
A motto that Katherine Brunt follows. She loves it when she can make her deliveries talk and that happens literally in every single match. It’s more of a routine.

Brunt was just following the routine that day but the deliveries did more than just talking. They went through the defence, kissed the pads more than the Australian batters would’ve loved. Of course, Australia came all prepared for something like that but Brunt doesn’t belong to a book that could be read.

One hour into the one-off Test at Worcester, Australia found themselves at 28 for 5. Jodie Fields walks in. Not an ideal situation to start your Test career as a captain but Fields had other plans to make things happen.

At one end, the debutant Rachael Haynes, a bit nervous, was taking the guard. All she was asked to do was to keep things simple and to take one ball at a time. Fields would talk to her every now and then as they broke the big goal into tiny ones. One fifty at a time.

The scoreboard because to change, one could see the reaction change in England faces, so much so that the skipper Edwards had to throw the ball to seven bowlers. Nothing really worked for them and three drop catches didn’t help the case too.

This knock is memorable in many ways. Majorly because of the fact that she was a wicket-keeper who could bat a bit when she wore the Australian colours for the first time.

Fields was a rarity when it comes to captaincy. She hates the word defence. She even hates to have those boundary fielders. If not for the rules, the fielding restrictions, she would find a way to squeeze all the fielders in. She doesn’t describe the fielding spots but defines them. Of course, she wouldn’t do that for everyone. She does respect the opponent batter when she has to. On a day in the office, you would see her go for a silly point, a couple of slips, a couple of gullys and other possible close positions.

Take the 2012 final. Australia had to defend 144 to take the trophy. England had different batters chipping in and Fields did her assignment well to bring in the right bowlers. When Perry to Edwards didn’t work, she turned to Lisa Sthalekar who did the trick. Perry, however, came back stronger to stop Sarah Taylor by tempting her to go over the offside field.

Talking about the field, the skipper sensed what Wyatt would want to do and kept Alex Blackwell at the right spot and Wyatt fell for the same. While Hazell tried her best to take the team home, she couldn’t get a six off the final delivery to give away a win to Australia.

A few months later, Fields was captaining Australia in a 50-over final. It wasn’t easy as she had to take a gamble. The team’s best bowler Ellyse Perry had to miss out three matches before the final because of an ankle injury and she wasn’t fully fit for the day. Fields had to choose between Perry and her replacement Holly Ferling. The latter was doing the job she was exactly asked to do and was too good to be left out but still, it was Perry and Fields opted for the experience over the form.

In return to Australia’s 259, West Indies began well, handled the new ball perfectly and the team had both Dottin and Taylor. Perry runs in, stops at the mid-way. She aborts. She goes back to start the run-up again, aborts once again.

Fields wasn’t looking happy and that was probably the first time you could see some expression on her face. She looks up to the dugout. Nervous. Confused. She had to think of a lot at that moment. Perry could walk away and if she does, she had to find a way to get through that ten overs. It was the difference between winning and losing. It was everything that was at stake.

However, Perry didn’t give up. The third time was a charm. She bowls one. Not a great delivery, went directly to Fields but Australia would take it. There was a loud cheer and Fields ran in, had a timeless brief chat with Perry, something that got her through.

Her sixth ball witnessed a lbw, tenth saw Taylor walking back after a caught and bowled and fifteenth removed McLean. Perry at that point had 3-2-2-3. Perry bowled three more overs. That’s six on the trot. Lisa Sthalekar bowled four more, that was seven. Fields introduced a bowling change but that didn’t go well.

West Indies had 12 and 7 runs in the next two overs. Fields just being her, brought back Perry and Sthalekar to the attack. West Indies had one of their best batters still at the crease and had more than 20 overs. Of course, that could’ve gone either way but you got to be Fields to attempt something like this, especially, in the final of the World Cup. The gamble worked and she lifted yet another ICC Trophy.

Fields was just 29 years old when she retired from international cricket but that didn’t keep the Queensland star away from the game as she still contributes to the development of Women’s cricket.

In 2014, she began a personal scholarship programme to help talented cricketers from regional centres. The recent player to benefit from the scholarship is Amy Hunter, who is from the small town of Kairi.

Power Shutdown likely in parts of Chennai on Sep 5th; Here’s the list of areas