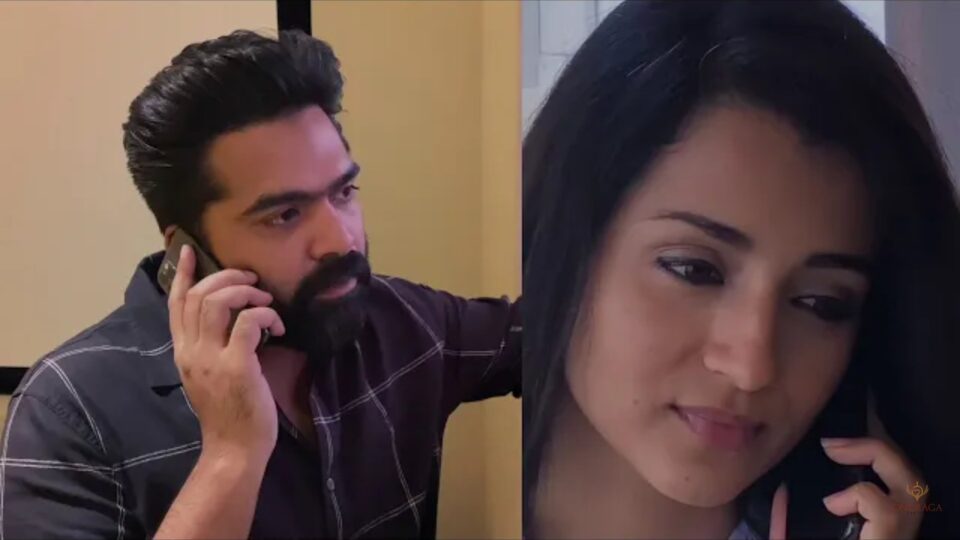 With Karthik Dial Seytha Yenn, Goutham Menon takes us to a heartwarming ride that narrates the life of Karthik and Jesse after years.

Nostalgia strikes us right from the first scene where we see Karthik played by STR who charmingly goes back to be the man we once loved.

With Aromale music playing in the background, one certainly would wish to forget STR’s post-VTV films.

VTV was a gem in many ways. The actors, the music everything fell in right place to create magic. Recreating the same old magic is always difficult but it is nice to get a sneak peek of Karthik-Jesse life.

Coming back to the movie, we see Karthik trying his hard to write. He writes, erases, rewrites but nothing seems to fit, blame the lockdown as well.

Jesse played by Trisha who looks almost the same even after ten years. During their conversation, we learn that she gave birth to twins now.

Karthik asks Jesse why she didn’t inform him that she is currently in Kerala.

Jesse explains how people aren’t taking things seriously in New York and they had to come to Kerala where there are only few coronavirus cases. Now, that’s the reality as well.

Karthik then emotionally breaks down, talking about the current situation how the theatres are closed currently and how he is struggling to come up with a new content. He adds that he is afraid of the future and felt like talking to her. In a broken voice, he tells Jesse that he needs her no matter what. He asks her to tell him that she loves him.

Jesse who as usual handles the situation well, says if it would make him feel better, she loves him. Karthik stops to add that she doesn’t love him the same way as he does.

She says yes and tells that he is such a baby. In fact, is like a third baby to her.

She reveals that she watched his favourite movies after years and then she started loving her husband right after the marriage. She smiles and tells that she wanted babies with her husband because she loved him. She also says that her husband knows that she is in touch with Karthik and he is okay with that because of the trust.

Karthik did not want to hear those but he left with no choice. He blames Mani Ratnam for Mouna Ragam, the movie that Jesse mentioned earlier in the call.

Later, she encourages him telling that he is a good artist and the stories would come to him for sure. He also adds that the things will get to normal soon and if not there is always online platform. She adds that people always love good content.

Then she asks if she could catch him later. Karthik asks if she forgot her trademark line. Jesse smiles to add that she is so used to it and is not going to repeat it anymore. There isn’t a girl out there for him, she says and they smile.

Karthik thanks her lighting up the mood and they cut the call.

We see a smiling Karthik once again falling in love with the art. Suddenly, the content hits him and he gladly continues to write.

Totally shot on Iphone, it works like a brilliant sequel. It certainly takes us back to good old days and it makes us realize how much we miss them.

Goutham Menon did not overdo anything here and it is just a moment shared between Karthik and Jesse. The relationship is so pure that it still exists but in a different form. The love of Jesse is still motivating Karthik to achieve big things and is great to see that they are still in touch. With AR Rahman’s music playing in the background, things only get better.

This short film is twelve minutes of pure nostalgia that I needed to get through this lockdown.

Actor Vijay’s next titled as ‘Master’

You should ask some cricketers about the #MeToo movement: Deepika Padukone