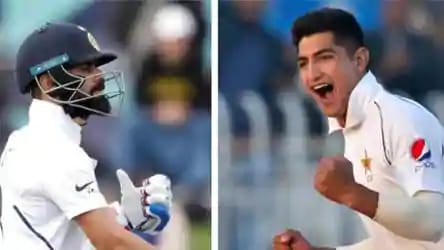 Former Pakistan cricketer Faisal Iqbal said that Pakistan youngster Naseem Shah is a real talent and Virat Kohli will be his bunny.

Recently, Naseem Shah gave an interview to a portal PakPassion.net. In the interview, “I hope that I can bowl well against India when that chance comes by and won’t let our fans down. As for Virat Kohli, I respect him but don’t fear him. It’s always a challenge to bowl to the best, but that’s where you have to raise your game. I look forward to playing against Virat Kohli and India whenever that chance comes,” Shah had said.

Retweeting the same, Faisal Iqbal said, “With due respect to Virat as a great batsman I am sure our upcoming superstar fast bowler @iNaseemShah with genuine pace and swing virat will be his bunny anytime.”

Adding more, he said, “Looking forward to the future battle,” with the hashtag Respect for both.

Shah caught the eyes of the fans during 2020 February series against Bangladesh where he became the youngest male cricketer to pick a hattrick in Test.

Virat Kohli’s rage is his fuel!

Men’s Ashes 2019: When the match was played without bails