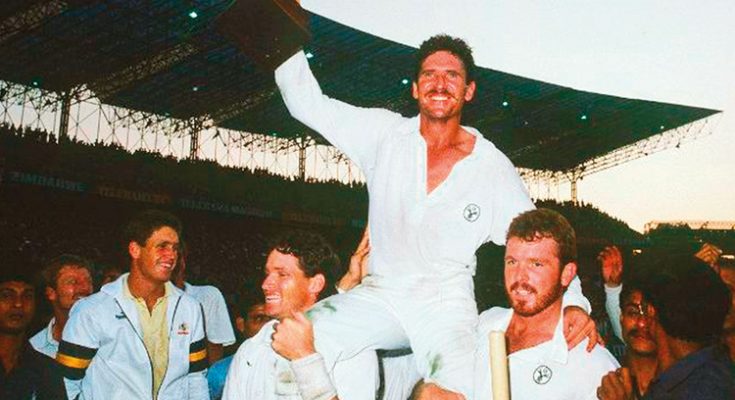 Australia’s first of many World Cup victories in the Men’s cricket came in the year 1987 where they defeated England in the final at Eden Gardens.

1987 World Cup had many firsts. It was the first time the World Cup moved from England to India and Pakistan. Then there was a reduction in the number of overs, for the first time ever, 50-over World Cup was introduced.

With seven Test-playing nations automatically qualifying for the tournament, Zimbabwe made it to the tournament by winning the 1996 ICC Trophy.

Australia took on India in the first match of the tournament and it was a nail-biter at Chennai where Australia went on to win the match by one run. Geoff Marsh 110 helped Australia to reach 270 in their fifty overs and in return, India had a positive start with Gavaskar and Srikkanth adding 69 runs for the first wicket. The debutant Siddhu and Srikkanth made 70-odd runs each that took the team close to the total. Eight needing from the last over, bowled by Steve Waugh, Manoj Prabhakar ran himself out when India was needing two runs off the final delivery and unfortunately, India lost the match by just one run.

After that match, India provided a dominating performance where the team went on to win all the next five matches and topped the group, thanks to the good net run rate. Australia finished second in the group with one defeat that came against India in the “reverse” fixture.

For the first time, West Indies was knocked out earlier than expected as England made it to the semifinal along with Pakistan.

England then made it to the final by defeating the hosts India convincingly and Australia defeated the other hosts Pakistan with ease to reach the final.

In the final, Australia posted 253 runs on the board after opting to bat first and they made 65 runs off the final five, thanks to Veletta’s 31-ball 45 after Boon’s 75 who perfectly played the anchor role for the team.

England lost Robinson early but Athey, Gooch, Gatting and Lamb who had starts took England close to the target. As the team lost quick wickets at the end, they fell seven short of the target before the packed Eden Gardens crowd. Steve Waugh and Allan Border captured two wickets each.

This was just the beginning for the Australian team and in fact one of the biggest victories in terms of competition.