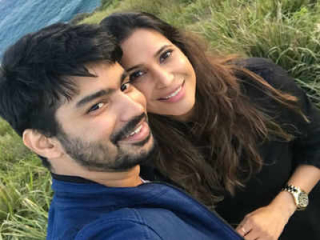 Actor Mahat who worked in movies like ‘Mankatha’, ‘Jilla’, rose to fame with his stint on Bigg Boss show.

He was one of the controversial contestants in the show as he confessed his love for the fellow contestant Yashika while being in a relationship with another girl, Prachi Mishra.

Prachi Mishra, then took to social media to announce the break up with the star. However, she took down the post in minutes and later, the pair reconciled.

Last year, the couple got engaged in a private ceremony and had a party for the friends and family.

Now, it looks like the couple is all set to get married in February. According to the reports, the marriage will be a closed ceremony with only a few friends and family.