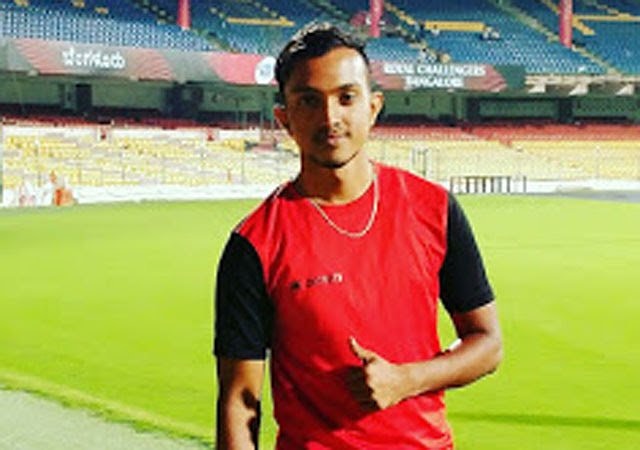 Call him Mahesh Kumar, he wouldn’t respond. Call him ‘Junior Bumrah’, he would. He bends, runs, releases the ball just like the latter. He is just too good as even Bumrah would wonder if he is looking at the mirror.

Does he bowl the same line?
Well, he tries to. He would fail a few times but he keeps trying. Hailing from a small town, he now travels four hours up and down to reach Bangalore. Former Karnataka U19 pacer would enjoy it, Why wouldn’t he?
Tell him you’d be bowling to ABD in the nets. Tell him you’d be bowling to Kohli and team, why wouldn’t he?
Spotted by Ashish Nehra, he is now bowling to the RCB team to tackle the ‘Bumrah worries’.

As RCB is taking on MI, Bumrah bowls at one side in the nets, he bowls in the other side and Bumrah acknowledges him with thumbs up only after he gets the yorker right on his fifth attempt that knocks Hetmyer out. Kohli shakes hands, a selfie and gifts signed boots, ABD says well-bowled mate.

He looks around to see all the players, he wishes to meet them all but happy that he breathes the same air as his idols. He goes back with all the memories he had, with tiny hopes of making it to the squad someday just like how Varun Chakravarthy, Prasidh Krishna and a few more made it after impressing players by bowling in nets.