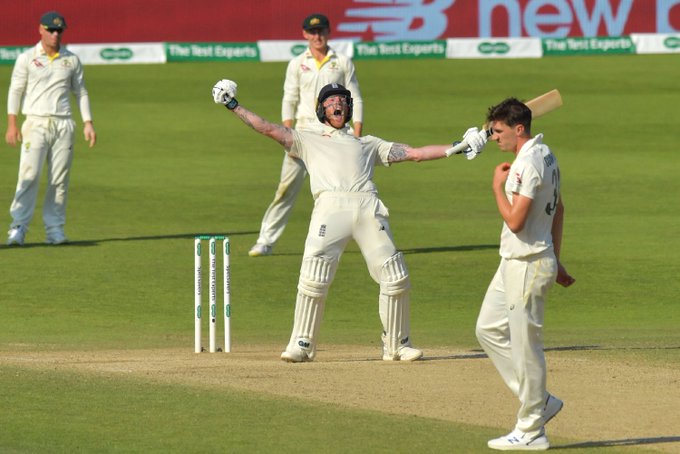 Once again, it was the brilliance from Lord Ben Stokes who produced one of the best knocks we will ever see in the Test cricket to take England home at the Leeds, thereby, levelling the series 1 all.

In the Smith-less line-up, Marnus Labuschagne played his role well in the first innings to take Australia to 179 with his 74. While Archer’s fiery 6-fer destroyed Australia, England’s fate got worse with their batters falling for the trap of Hazlewood’s fifer who was backed by Cummins’s 3-wicket haul and Pattinson’s two as England managed only 67 with Denly top-scoring with 12.

Come second innings, there was a better batting performance from the visitors, thanks to Labuschagne once again as his 80 helped the team to reach 246.

Chasing more than 340 runs with two and a quarter days in the hand, England did put themselves in a better situation after losing the openers early.

While Denly’s fifty and Root’s 77 put England at the front, Australia had no other go than picking up wickets and they did. Eventually got everyone out. With 70+ more runs to get with only one wicket in the hand, Australia was the clear favourites but Stokes had other thoughts.

He stood tall once again for his team with an entertaining knock of 135* that had everything. Till the last moment of the match, Australia did fight well but unfortunately, the misfields, catch drops and most importantly, the luck which wasn’t helping them. Even during the previous over of the match, when all the three lights turned red. While England had a familiar hero rising to the occasion, Australia will be kicking themselves for letting go of the opportunities but that’s how it goes. That’s how cricket goes. They will have to move on, get ready for the next battle and with Smith’s return, this team will get better.