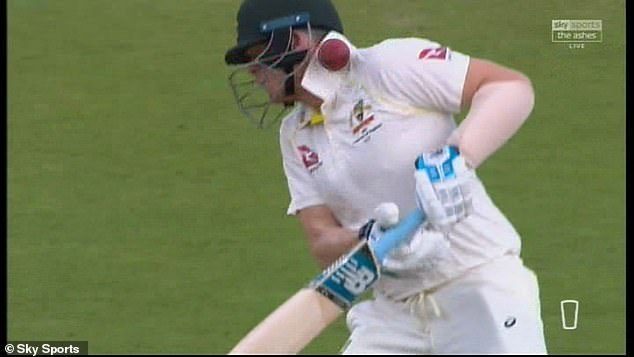 Steve Smith was hit by a Jofra Archer bouncer on the lower case of the helmet. It was a nasty bouncer from Jofra Archer as it knocked him off the ground and he wasn’t able to stand for a few minutes.

It happened in the 77th over of the Innings as Jofra was bowling a hostile spell, cranking the batsmen up with bouncers. Steve Smith for the first time was looking uncomfortable against a bowler in this series. The average speed of his spell was 92.2 MPH.

The first ball of the over was a short ball on the body, which Smith pulled for a boundary. The second ball was short of a length, steeping bounce and quicker off the pitch. It hit Smith near the neck on the helmet as he was slow to sway away from the bouncer.

The physio and medical staff of both the teams ran in took a good look at him and talked him to leave the ground. It looked like Steve Smith was saying that he felt great. He didn’t want to leave, but as the concussion rules have changed recently Smith had to be assessed.

Moreover, his health is more important than the sport as we have seen what can be the worst possible case. It is significant to note that earlier Steve Smith was hit on the forearm by Archer. He had a huge swelling. He was visibly suffering in pain. Steve didn’t want to leave the ground. He took a pill, wore a bandage and arm pad and continued to bat for his team.

Steve Smith was batting on 80 as he walked off the ground. There wasn’t a single boo among the crowd as Smith walked back and the entire stadium and the long room applauded. Cricket Australia has released a statement that he is being assessed by a doctor for concussion.

Steve Smith came back into bat as Woakes removed Peter Siddle. He walked among mixed reaction of boos and applause from the crowd. He hit back to back boundaries off Woakes to resume his innings as Australia get near the England score.