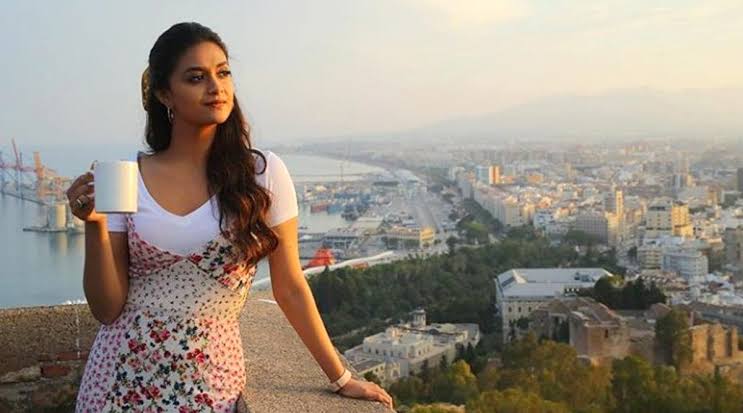 The laudable intention behind the film seems to have missed the target when it marks its dart plot due to its poor writing. Keerthy Suresh does her best in this drama which is sadly not enough to save it. A woman’s dream and its conception is what’s behind the film to drive it till the finish line. But the structure, the film borrows, to establish its idea is less inspiring and disappointing. The characters in Miss India are uninspiring puppets who are restricted to their written lines and nothing more.

Earlier this year, Director Anu Menon’s  Shankuntala Devi, starred Vidya Balan, explored a woman’s world through a woman’s eye. It’s about a woman who possessed so much talent to win this entire world. Despite clutching to her spirit which is enough to push any doors in the men’s world, We witness Shakuntala Devi gets desperate and vulnerable a little in the moment of solitude, in the face of struggles. She crumbles like any human does and bounces back. There is an arc in such character designs. Director Narendra Nath’s characters in Miss India seem like they are carved out of cardboard. They are trapped in a bordered template that the filmmaker sets himself to and they never surpass it. The characters don’t have an arc to pursue. They are as flat as a wooden plank. We don’t get a chance to get too personal with them.

The drama seems merely a fantasy of a man when he thinks about what a successful woman’s life look like. It’s evident from the writing that the filmmaker thinks a goal oriented woman doesn’t have any room for her desires, she doesn’t seem to have any desires at all. That’s the model woman this filmmaker sets for us to see. Keerthy’s Samyuktha character says “If a woman instantly says yes to go out with a man, she isn’t a woman at all”. She does score few points when she says a family should be proud of their daughters and thinks the man who she marries is a lucky man and not always the other way around. The film is focused on the sunshine and positive spirits that drives this ambitious woman and neglects to capture her resilience in the face of challenges, a challenge in the form of a man Jagapathy Babu. It’s a Coffee vs Chai war all over the film.

It’s refreshing to see a woman who doesn’t run around a tree and falls in love with a man head over heels. But neglecting her desires and denying the chance to peek into her head, is not refreshing at all. It’s a shackle in another manner. Maybe she doesn’t have any interest to explore but the film seems really safe to hide behind its template which upholds a goal oriented woman and looks down on one who carries such desires. The film silently imbues a woman with a goal and also humanly desires couldn’t possibly be serious about her goal. It seems they take an important message, a message to induce the importance of pursing a goal, but turns it into a farce, a disappointing one in every sense.

Suriya supports Jyotika, ‘we wish to teach kids that humanity is important than religion’