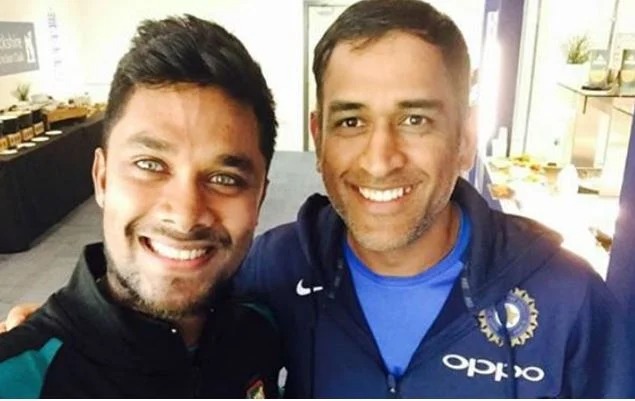 Bangladesh cricketer Shabbir Rahman is one of the players who admire MS Dhoni. During 2016 T20 World Cup, Rahman was taking the game away from the Indian team with his quick-fire 26 off 15. However, India pulled things back when Dhoni stumped him off Raina.

Remembering the 2016 World Cup, Shabbir Rahman was quick enough to get back to his crease during the 2019 World Cup where his team bundled out for 286 runs chasing a stiff total of 317 as India clinched victory by 28 runs in Birmingham.

For Rahman though the best moment of the day was when he asked Dhoni his bat. The former India captain gave him the bat but with the condition that he cannot play with it against his side.

“Then I say to him give me one of your bats and I will try to play against you with that bat and He told me that not against us, you can play with another team but can’t play against me,” Sabbir Rahman said in an interview to Cricfrenzy.

“[During the home series in 2015] I asked him [MS Dhoni] how you hit such big sixes. Whatever you hit becomes six, how. Tell me the secret of your bat. What is in your bat that we don’t have and as a result our sixes don’t go as far as your ones. He told me that it’s just confidence. Besides, there is nothing in my bat. If I think that I’m going to be hit six, then there will be 90 sixes out of 100. That is confidence,” added Rahman.