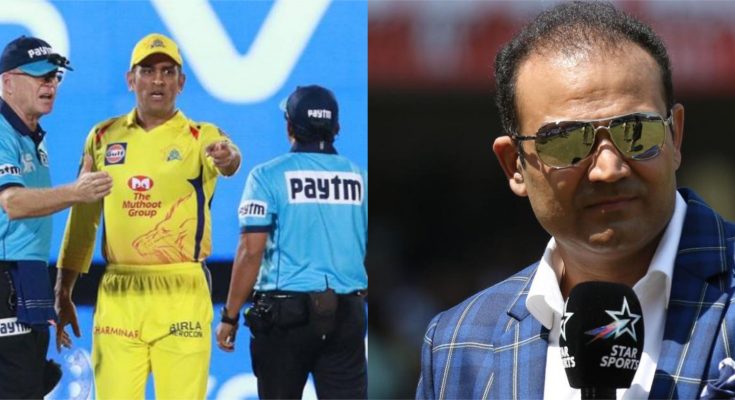 Former Indian opener feels that MS Dhoni was let off easily after the angry outburst at the umpire Ulhas Gandhe and should have been banned for 2-3 matches to set a proper example.

MS Dhoni was fined 50% of the match fee for entering the field of play to confront Gandhe for not giving a waist-high no-ball during the match against Rajasthan Royals.

“Had he been so angry for the Indian team, I would have been happy. Maybe he is that stage where he will retire in a year but we have never seen Dhoni getting angry FOR the Indian team,” Virender Sehwag told Cricbuzz.

“Maybe he has become too emotional for Chennai Super Kings, I don’t think he should have gone to the ground. The two batsmen at the pitch were asking the umpires what happened with that no-ball signal.

“I think MS Dhoni got away lightly. They could have banned him for one or two matches. Now if this has happened, tomorrow some other captain might also storm onto the field and question the umpires. Then what will be the importance of an umpire?

“I think he got away lightly. They should have banned him for one or two matches and the match referee should have set an example,” Sehwag said.

“If any player or captain storms onto the field like that, what’s the value of an umpire. Mistakes can happen. It’s not like MS Dhoni has never made any mistakes but no one questioned him. Umpires never went to Dhoni and asked him why he made a mistake.

“Umpires can also make mistakes. They are also human. Had he stayed out of the field and spoken to the fourth umpire or communicated through a walkie-talkie, that would have been better. It would not have looked so bad. It looked so bad because he went onto the field,” Sehwag said.