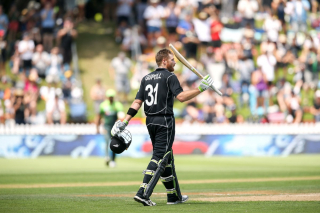 Pakistan, on their way to ending the losing streak against Kiwis, was pushed back by the injury of Shoaib Malik, who had to make way for Umar Amin. Kiwis had the license to make changes to the team.

After winning the toss and batting first, the hosts were given a great start by Guptill and Munro. After an opening stand of fifty plus, Munro got out for 34. Williamson had a decent contribution; Guptill-Taylor duo added 112, guiding the team to 271/7 in their 50 overs. Guptill scored yet another ton while Taylor added 59.

It was a match that Pakistan wanted to play and win for the pride. The visitors needed their batsmen to step up but they failed. Thanks to Haris Sohail, Shadab Khan and the lower order contribution that took the team close to the total. Sohail scored 63 and Shadab added 54; Pakistan was all out for 256. Henry had four wickets and Santner picked three.

The Kiwis successfully completes the series whitewash. Next up is T20I series.