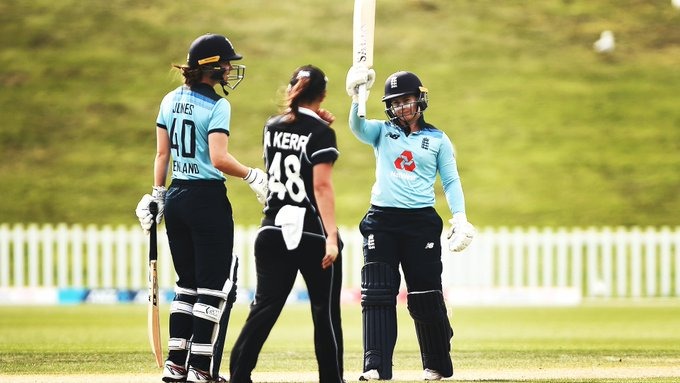 It was yet another sad outing for New Zealand as they went down to England by seven wickets at University Oval, Dunedin on Saturday. New Zealand opted to bat first and the toss was the only thing that went their way.

Brunt and Sciver ran through the batting order of New Zealand and they found themselves at 76 for 6. Halliday, playing only her 2nd match, showed the team how it is done as she went on to score yet another fifty, ended with 60 runs. In the end, Jess Kerr (who replaced injured Tahuhu in the team) and Hannah Rowe added an important partnership to take the team to 192.

Jess Kerr then came back to remove Danni Wyatt who is still struggling with her form. Soon, indecision in the middle caused Knight to lose her wicket. It didn’t matter as Beaumont once again took up the anchor role while Sciver smashed them all. The latter scored 61 and got out to Halliday, her maiden wicket in ODIs.

Amy Jones then handled the pressure very well, scored 46* and took her team home safe. Beaumont ended with 72*, this is her 4th consecutive fifty against New Zealand.

With this, England have won the series 2-0 with one more match to go, on February 28th.