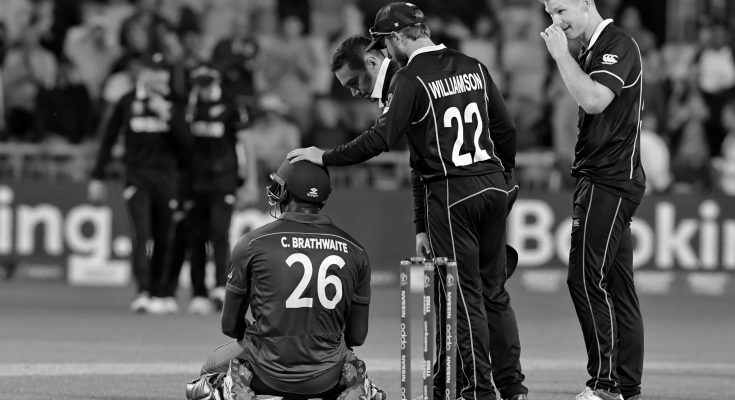 From assertive exclamatory to a puzzling question mark, the journey of Brathwaite from his famous T20 knock in the final of 2016 World Cup to where he is now, is something memorably forgettable.

Sometimes, fans are poor when it comes to treating the players. They expect the stars to perform in every single match they play. After Brathwaite’s hit off Stokes, they expected him to play a similar kind of knocks whenever he took the field.
It doesn’t happen every single night. That’s why we call them special knock, and with no doubts, today was the day.

Maybe, Brathwaite loves the pressure and not the normal days. The pressure brings the best in him. Today was a pressure game. Today was the day he decided to show the world what he is made of. He was against one of the good bowling attacks as well.

Captain Kane knew what Brathwaite can do. They play for the same team in the IPL and Kane captains him as well. He knows how brutal Brathwaite can be and as expected he made the hitting looks easy today. Brathwaite knows Kane too. He knows the plans of Kane, and he almost got the better of him.

He targetted the right bowlers while respecting the others on their good day. He didn’t care about who was in the other end because he knew he can win the match single-handedly and he almost pulled it off.

Cricket is brutal in many ways. You are carrying the emotions of millions on the field and if you lose more than the loss what hurts more is the disappointment on the faces of the fans whom you are letting down and today, it is not going to be easy for Brathwaite because he climbed the ladders almost reached the endpoint only to fall down to the bottom by the snake.

This is going to hurt him for long, long years to come but this knock did show the class and the power of Brathwaite who has always overshadowed by other all-rounders in the team.

He might not have put the Windies on the other end, he sure went back to where he belongs. It took three years for the man to fix ‘Carlos Brathwaite! Remember the name!’ again.

***
This picture restores the spirit of cricket. Look at the way Captain Kane consoles him.