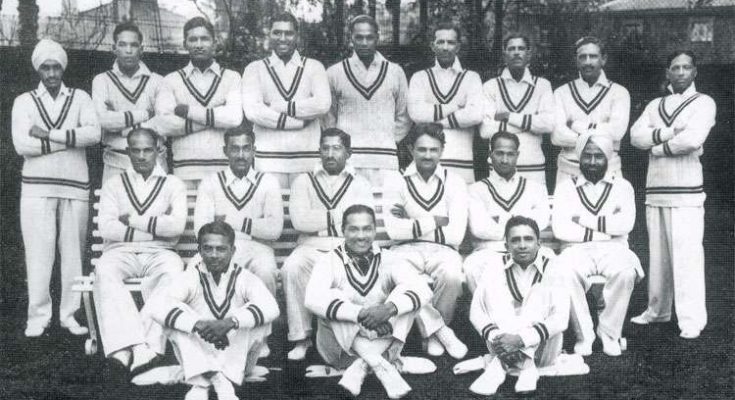 On this day, in 1932, India played their first ever official Test match!

India has come far in the world of Test cricket, and it all started in 1932 on this day. The cricket in India believed to be brought in by the British traders and sailors, and the first match was believed to be played in India by British sailors in 1721.

The Indians who showed interest in the game was Parsis, and they even started Oriental Cricket Club followed by Parsis Cricket Club. They sent their team to play in England, and the team played 28 matches and won only one and drew eight.

After two more unofficial tours, the Board of Control for Cricket in India was set up in1928, and the first official Indian team started their tour to England.

Maharaja of Patiala was first named the captain of India, and Prince Ganshyamsinhji of Limbdi as vice-captain, and the Maharaj Kumar of Vizianagram as the deputy vice-captain but days before the tour, all the players withdrew sighting either health complications or the poor form.

CK Nayudu then went on to lead the Indian team for the first time officially on June 25, 1932. It was a three-day match starting from 25 to 28 with Sunday being an off-day.

With weather being kind, the Lords’ welcomed more than 25,000 people to witness India’s first official match. Having won the toss, England opted to bat first, and they were stunned by the class shown by the Indian bowlers.

Mohammad Nissar knocked both the openers out, and a run-out pushed England to shocking 19/3. Hammond and captain Jardine built up a partnership and at 101, England lost Hammond to Amar Singh. Captain Nayudu they removed Paynter, but Jardine continued to dominate this time along with the keeper Ames. Jardine’s 79 and Ames’s 65 and also with some tiny contributions from the lower order took England to 259.

For India, it was Nissar’s five-fer that stunned the hosts. Nissar had support from Amar Singh and Nayudu who grabbed two wickets each.

India then ended the first day with 30 for no loss. This did raise a lot of eyebrows, and the turn up for the second day only got increased.

Despite having starts none of the Indian players converted them, and the team got out for just 189 with Nayudu top-scoring with 40. Bowes (Four wickets) and Voce (three wickets) turned the match in the favour of England.

In the second innings, it was the turn of Jahangir Khan who grabbed four wickets. Amar Singh picked up two while Nissar and Naoomal Jaoomal picked up one. Once again it was captain Jardine and Paynter who took England to 275 for 8 before declaring. Jardine stayed unbeaten at 85 while Paynter made 54.

In return, India once again started off well with 41 runs for the first wicket, but nobody really could survive the England bowlers. While Amar Singh showed courage, he kept running out of partners.

Amar Singh became the first Indian to score a fifty in the Test match as he went on to make 51 to take the team to 187.

Though the Indian team lost the match, they went on to make heads turn as the team did have their moments that put England in the back foot, something nobody thought. The courage and the grit shown by the Indian team was very evident. England then visited India in the next year’s winter.

Soon after the Independence, the players in the team were separated by the border and a few of the cricketers’ sons went to represent Pakistan.

Years later, on the same day at the same country, India lifted the World Cup for the first time under the captaincy of Kapil Dev.

Undoubtedly, this day is called the red letter day in Indian cricket.