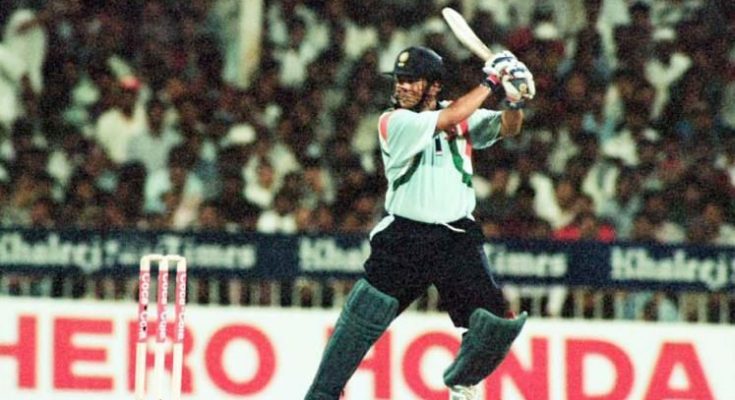 Australia in the late ’90s was a class apart. All their fifteen-not only eleven- were match-winners. They thrashed, destroyed every single team they came across. Winning wasn’t a prize for them but it was a habit. If you are scoring a fifty against this team, you are a champion batsman.

While scoring the century itself is almost impossible against this team, now imagine two consecutive centuries in a space of three days in the searing heat, in two pressure knockout games. Oh wait, add some sandstorm to the story.

The men in yellow batted first under the lights and provided India with a target of 285, a target which is above par those days. To add more worries for India, a sandstorm took 25 minutes away from the game, and we had a revised target of 276. But that wasn’t really our goal. Our goal was to qualify to the final- the other team was New Zealand- for which India needed 237.

While Australia was happy to see the desert air cleared out, lesser did they know the real storm was yet to come. The storm that carried the hopes of millions. It wasn’t a World Cup or any other major tournament. It was just a tri-series but hey, it was Australia and it was Sachin Tendulkar.

We played in the Gulf, but it was like home as there were thousands of men and women turned out to witness this epic. Sachin did not wait for long to make their money worth as he showed determination right from ball one. Those straight drives were reaching the boundaries, Cover drives were unstoppable, and he was clearing the fence with ease. Everything was so perfect and as beautiful as your favourite song. It was like we witnessed God standing all alone, taking on his opponent while the sand storm surrounding them to add some extra effects.

There were no nervous nineties, no poor shotmaking. It was Sachin. Just Sachin before the Australian team.

Normally, he would take off his helmet and look up the sky every time he reaches a milestone. This time he didn’t remove his helmet. Not when he reached his ton, not when he helped us qualify, not when he walked back to applause that broke the skies.

Nobody knew what was going through his mind all we knew was he wanted to win us the game but in the right way. When he reached 143 off 131, his then highest score, the umpire didn’t think he edged the delivery but Sachin being Sachin decided to walk away. He walked away with a down face, pale, to thunderous claps from the crowd who wanted to see more of it.

That day, we won the battle but not the war. We had to wait for two more days to rattle Australia- courtesy Sachin once again- and to lift the Coca-Cola Cup. This time we won the war too. This time 134 from the God mode activated Sachin.

It was a war between Sachin and Warne too. Two of the best players in the world but Sachin treated him the same way he did the other bowlers. He showed whos who.

Years later, he has everything. Starting from winning the World Cup to ODI Double century but no matter what, nothing really comes close to this innings. Because It was Sachin in God mode. Because it was Australia.