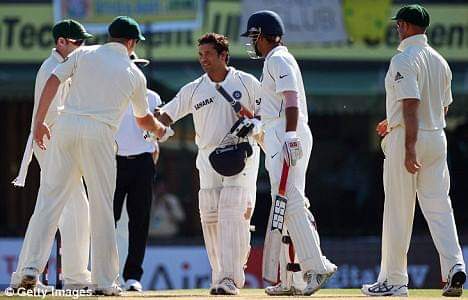 It was the afternoon, 2.31 pm. The Master Blaster steered one off Siddle to the third-man boundary for three runs and eventually became the highest run-getter.

Unlike today, those days there used to be a healthy competition between the legends who kept adding the bundle of runs for their team. Lara and Sachin led the battle. When Lara retired, it was inevitable that Sachin would break Lara’s record, but nobody would have thought that the master blaster would take two years to get to that mark. There was a lot of expectations on Sachin during the series against Sri Lanka but he flunked. Even in the second Test of this Border-Gavaskar Trophy where he played a match-saving knock. When one thought that he would make it this time, he fell 15 runs short.

Despite a countable amount of people on the stadium, the whole nation was roaring for the man. He initially struggled and was dropped once as well. Later, nobody could stop him as he not only crossed Lara but also became the first man to score 12k Test runs while bringing up his 50th Test fifty.

After opting to bat first, the Indian openers followed by Dravid had starts but all eyes were on Sachin Tendulkar who along with Ganguly added an excellent partnership. Ganguly went on to make a ton as well. After Sachin’s dismissal, Dhoni joined to make a quick 92. India was bowled for 469. In response, Mishra’s fifer reduced the visitors to 269.
In the second innings, Sehwag’s 98, Gambhir’s 104 followed by Dhoni’s 68 at number three took India to 316/3.

Chasing a mammoth total, Australia suffered in the hands the Indian bowlers, faced one of the biggest defeats ever as India won the match by 320 runs, took a 2-0 lead.

Shafali Verma could play in The Hundred