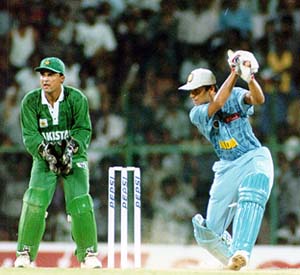 It was the four-nation Independence Cup and the first match between the arch-rivals India and Pakistan at Chennai.

India was chasing 326, and they lost Sachin Tendulkar early for just four runs. That put Dravid in and along with Ganguly, they slowed built up a partnership, but since the required run-rate was climbing, Dada had to attack but became the 2nd of the five victims for Aaqib Javed. Vinod Kambli then replaced Ganguly and Dravid was calm as usual, trying to play his anchor role perfectly. Kambli was knocking the ball well, and when he crossed the half-century mark, India was on top, but that didn’t last long as after adding 134 runs alongside Dravid, Kambli walked back. Still, Dravid was looking confident. Even a feather touch from Dravid looked perfect that day. He was displaying his stroke play all around the ground, those inside out shot over the covers stood out, and most importantly was running hard like he always does. With Robin Singh at the other end, Dravid was feeling less pressure. At 99, he missed out a delivery that was going down the leg, and unusually animated Dravid was seen kicking himself. Then a single down to the long on helped Dravid to get to his first hundred in 107 balls.

He took his cap and acknowledged the crowd. He pointed his bat to the dressing room and knew the job was not done yet. Unfortunately, he managed to add only seven more runs as he fell for Aaqib Ahmed at 107.

Robin Singh and Nayan Mongia then chipped in for a tiny partnership, but that wasn’t enough for India to beat Pakistan as the team fell 35 runs short of the total.

This would have been Dravid’s day. He certainly was the warrior for India that day, but unfortunately, like his most of the achievements, it was overshadowed by someone else’s knock. This time it was Saeed Anwar.

The Pakistan opener looked like he was at a different level as he went on to play one of the best innings ever, scoring 194. Had he crossed 200, he would have been the first ever to do so as Belinda Clark’s 229 came later in the same year.

Right from ball one, Anwar showed an excellent display of shots. He had answers to all the deliveries Indian bowlers tried. After 22 fours and five sixes to 194, he got out to Sachin Tendulkar.

It was like the master blaster wanted to stop by himself. Years later, he became only the second cricketer and the first man to reach the 200-mark.