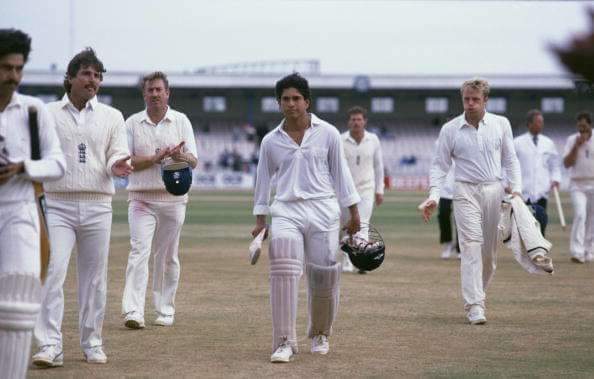 These were the words of legendary commentator Late Richie Benaud, when a teenager named Sachin Ramesh Tendulkar reached to his first test match century at Old Trafford, Manchester; in the process saved a test match for India.

It was an innings of pure grit and determination from the youngster against the mighty heavyweights England. This innings drew the comparison between the boy and the Indian great Sunil Gavaskar. The boy resembled the little master Sunil Gavaskar in both height and with the bat had the most remarkable temperament as well.

Earlier, batting first hosts England compiled a total of 519 after Graham Gooch, Michael Atherton and Robin Smith scored individual hundreds. Gooch and Atherton added 225 for the first wicket, and Smith’s ton down the order helped the England team to get past 500 with ease.

In response, Ravi Shastri and Navjot Singh Siddhu got out early, but it was the captain Mohammad Azharuddin’s 179 and Sanjay Manjrekar’s 93 along with Sachin Tendulkar’s 68 showed some resistance, took India to a modest total of 432 in the first innings.

England once again smashed the Indian bowlers. Lamb’s 109 helped them to get over the 300-mark, and the hosts declared for 320/4.

Chasing 408 to win, India got off to a worst possible start, and later, they were reduced to 183 for 6 with Kapil Dev, India’s only hope being the last man to dismiss. With a minimum of 88 overs left, the game looked past saving. Instead, his was the last wicket to fall.

The kid stood tall along with Manoj Prabhakar put together an unbeaten partnership of 160 runs. When Prabhakar had joined Tendulkar, there were around two and half hours left in the game but a knock of 119 runs guided India to end the match in a draw. 119 along with 68 in the first innings won Sachin Tendulkar is first of the many ‘man of the match’ awards.

“My ambition is just to play for my country as long as possible and to do my best,” said Tendulkar afterwards. England’s captain Gooch said: “Tendulkar played excellent innings. He is a superb player for his age, just like an old pro.”

At the end of the match, Richie went on to add, “We will see a lot more centuries flow from his bat, I just hope I am around to see them”.

Oh yes, On this day in 1948: Don Bradman in his final Test innings bowled for a duck at The Oval.