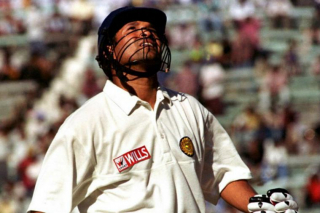 Heartbreaks, Sachin knocks, Close contests and loss. If you are from my generation, you know it and understand it better than anyone else.

January 31, 1999, at Chennai saw a match that fell into a similar pattern and still breaks our heart whenever we think about it. It was the first Test match between the arch-rivals India and Pakistan in five years. Whenever there’s a contest between these two countries, it was more than just the game and imagine the excitement if both the teams are playing after years. While it was a full stadium, literally the same amount of cops were appointed for additional security.

Prasad’s six wickets reduced the visitors to 238 late on Day one. The homeboy and the debutant Ramesh and Laxman opened the innings and played out the day. A quick 43 from Ramesh and the half-centuries from Dravid and Ganguly helped India to take a tiny lead of 16-odd runs. It was Saqlain Mushtaq’s day. His fifer gave Pakistan a hope before the constantly increasing crowd.

Shahid Afridi, then an opener, scored 141 and was hitting the bowlers all over the park while Inzamam-ul-Haq was enjoying the knock from the other end, he reached yet another fifty. This pair managed to survive the ‘Prasad storm’ for a long period. Once again Prasad grabbed six wickets to finish Pakistan’s innings for just 286.

The stage was set for the Indians who would have thought that they had a chance and for Pakistan, they certainly believed they were very much in especially after removing both the openers cheaply.

Sachin did not have a great time in the middle as well. Waqar Younis was literally killing it.

*Waqar welcomed me to the crease with a couple of bouncers and even walked up to me on one occasion to say, ‘Ball nazar aayi?’ (Did you see the ball?) I didn’t say a thing, but my eye contact was enough to give him the message. I hardly moved and he was soon walking back to his bowling mark. I remember muttering to myself, ‘You are not bowling that quick, my friend.’*
It was a warm Sunday morning and India was 40-2 with Sachin Tendulkar and Rahul Dravid at the crease. Over 45,000 people came in to witness the match with most of them shouting ‘jeetega jeetega India jeetega’ and some of the great slogans in Tamil. As the match started, India lost Dravid early. A half an hour later, Azharuddin and Ganguly followed as well. All of a sudden, the hosts were fighting to stay in the match. Still, with Sachin on the crease, the team believed, so did the crowd. The Indian keeper Mongia joined the master and provided excellent resistance. He played for almost 200 minutes, and when India thought that they can relax a bit, Mongia was dismissed by Akram for 52.

Sachin couldn’t do much. While his partners were betraying him, he had to face yet another betrayal. This time, it was his back. At 83, Sachin picked up a brutal back injury that required Physio’s attention. Sachin preferred to carry on despite the injury. He was carrying the team on his shoulders and his back was getting worse with every single delivery. The match that was see-sawing right for four days finally had Pakistan closing in with Sachin, the lone warrior standing between the visitors and the victory. He knew this win would mean so much for everyone. The crowd got involved as well and it seemed like one of the loudest ‘Saaachin Saachin’ everyone would have heard. With a minimal celebration, Sachin completed his ton and quickly went back to work. Priorities.

Some 405 minutes later, Sachin’s concentration dropped a bit and Saqlain Mushtaq who was having yet another excellent day dismissed the man at 136 with India needing another 16 runs to win. Sachin singlehandedly got the team this close and yet he was disappointed for not being there till the end. At that stage, he certainly would have thought that India would manage to win, well, everybody would have thought but you know, it’s India and this team can provide any type of performance be it the best or the worst. The latter took over and the team fell with 12 runs short of the target.

Both Indian and Pakistan players were down, with Indians looking down in disbelief while the Pakistanis kissing the pitch with joy.

Though the result didn’t go their way, the Chennai crowd once again stood out by providing standing ovation and applauding the Pakistan team for their win. From jeetega jeetega India jeetega to applauding the opponents the crowd showed the right sportsmanship. In one of the rarest occasions, Pakistan team went on victory lap with the crowd though disappointed clapped for the Pakistan team which deserved it that day. Been twenty years, still, this is the best moment of sportsmanship I’ve ever witnessed in the game and this always will stay close to my heart.

For Sachin Tendulkar, who later was announced the man of the match, couldn’t believe and was in tears right after the match that he didn’t come out to receive his award. It took years for him to accept the victory.

Sam Billings takes a break from cricket after England omission