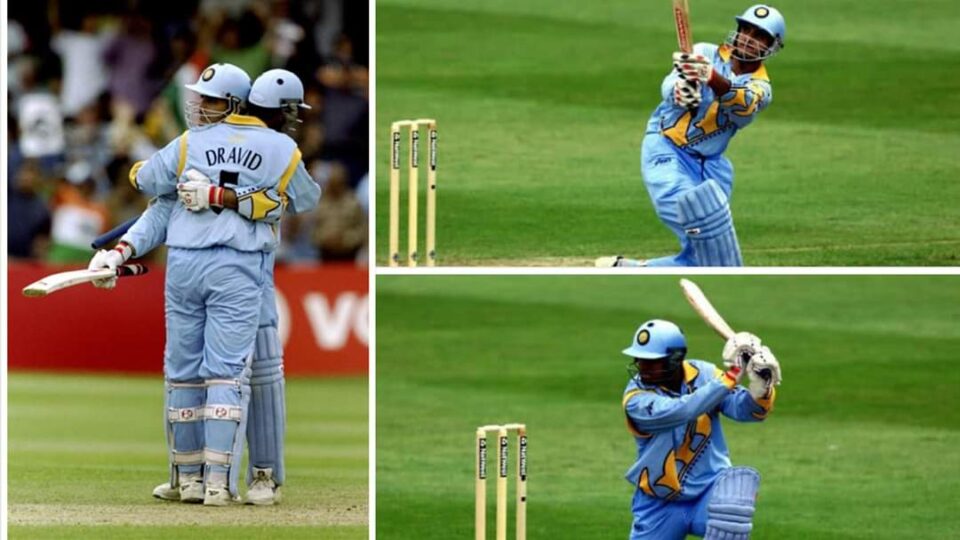 India was taking on the defending champions Sri Lanka right after their clash against Kenya where we witnessed Sachin Tendulkar-Rahul Dravid’s brilliance. Coming into this match, Rahul Dravid looked like he wasn’t satisfied with the ton the other night and decided to go for it once again. This time he was accompanied by Sourav Ganguly, and once again he was playing the role which he loves the most-making sure to hold on and taking the pressure from the attacking batters by giving the license to go for it or simply the anchor role. He replaced Sadagopan Ramesh who had to go back for just five runs.

It was the first delivery of the third over where Ganguly starts to unleash himself. He flicks off his legs for a boundary. Five overs later, there is a gentle touch, back past the bowler for a four. There starts his domination towards the straight boundary which was shorter than the others and Ganguly makes full use of it. Let’s not forget the trademark Ganguly cover drive, a poster material. There is one such shot every now and then either for a couple or for a boundary. You should see Dravid’s involvement here as well where he keeps pushing Ganguly for twos. In the 23rd over, Ganguly gets his half-centuries with a single, raises his bat acknowledging the players in the dressing room.

Knowing that he is preferring off-side and straight the most, the bowlers start to target the leg stump line and he dances down the pitch, hits them to the mid-wicket boundary. Then a chip over the covers off Muralitharan for a boundary, and follows it with a crafty cut shot. In the 32nd over from Jayasuriya, Ganguly gives him his own medicine smashes one back over his head, in fact, it goes out of the park. He smiles at Dravid, says ‘Chal gaye’.

At 98, he flicks one off Upashantha for his hundred, raises his hands, looks up, smashes his bat down. He didn’t stop there, in fact, it was when he starts hitting the ball hard. He dances down the pitch literally for every single delivery. He hits them all. A few at the covers and a few back-past the bowler’s head. He smashes those that come at his legs, there were many as the spinners were looking out for a stumping. Even a mishit finds the boundary line.

The worst of all is that the cameraman failed to capture where the ball went. Well, we cannot blame him as well because even the Sri Lankan players had no idea. Such was his hitting. Everything clear and quick. At least the cameraman caught one before a Sri Lankan player could. Yes, there were drop catches, Ganguly was dropped twice, but it was his day. The first drop catch came in the 45th over, and the next two shots went for the boundary as well. With that, Ganguly and Dravid cross the 300-run partnership for the second wicket. In the same over, a six over the bowler’s head takes Ganguly to 150. He raises his hands and whips his bat; overjoyed Dravid runs in to hug him. The crowd goes mad at every single shot there were Indian flags flying high, we could see the fans dance out there whenever Ganguly dances down the wicket. More than making the mark, Ganguly was on his way to make history. His last fifty came off just 24 deliveries.

In the next over, India loses Dravid for a well-made yet a silent 145 off 129 deliveries with 17 artistic boundaries and a six. Sri Lanka, without no options, goes back to Jayasuriya for the 47th over, and Ganguly cannot thank them more as he hits two sixes, and literally cleared every single side of the ground.

India then goes on to lose Tendulkar and Robin Singh early but that didn’t stop Ganguly. Touch down to the fine leg and a single help Ganguly to go past Kapil Dev’s 175 for the most runs by an Indian, he acknowledges the crowd for the same. His final boundary came in the 49th over then in the last over, a mishit finds the fielder at the long on boundary, and finally, the catch was taken. A disappointed Ganguly walks back to the dressing room to roaring applause from the crowd who definitely were lucky enough to witness a carnage that consisted of 17 fours and seven sixes.

Considering the fact that it came 20 years back when T20 didn’t exist at the time when power hitting was difficult and relatively new, Ganguly took the game to the next level. His last 83 runs came off just 39 deliveries.

Chasing a total of 373, Sri Lanka managed only 216, thanks to Robin Singh’s fifer. If not for the fighting fifty from Aravinda De Silva, Sri Lanka would have lost the game miserably.

With this victory, India finished second in the group and made it to the next stage of the World Cup.