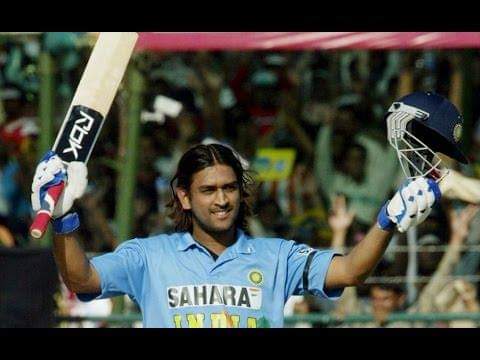 2005 was the time when India actually started to debate about Dhoni and Dhoni’s talent, especially, after smashing 148 off 123 against the arch-rivals Pakistan in April. Thanks to Dada for having the confidence on Dhoni and allowing Dhoni to bat before him. A relatively new kid on the team, Dhoni grabbed all the opportunities that came on his way and scoring 148 was one of them.

His best happened during the Sri Lanka series in the same year. As Dada was injured and opted out, Dravid captained the side. India won the first two ODIs convincingly, and it was the third match of the series.

Sri Lanka batted first, and as usual, Sangakkara’s 134 along with Jayawardene’s 71 helped Sri Lanka to reach 298 in their 50 overs.

2005 was the time where even a target of 240 looked tricky. The conditions and the bowlers dominated the game a bit more than what it is now. Also, 2005 was the time where we used to switch off the television after the fall of the top-order. With a massive target of 299 on the board, Every eye was on the Indian destructive opening pair of Sachin Tendulkar and Virender Sehwag. To add more pressure, Vaas removed Tendulkar early, and the pressure was mounting on India. Come Dhoni.

MS Dhoni did look comfortable right from ball one, unlike Sehwag who struggled a bit. Not every match you see Sehwag play an anchor role to allow his partner to take the lead but this time the things were different. Sehwag was taking singles to give the maximum strike to Dhoni who was taking on the bowlers.

After Sehwag’s dismissal at 39, The captain Dravid joined Dhoni, and with no other second thoughts, Dravid was super happy to give the strike to Dhoni who smashed a ton off just 85 deliveries and was looking extremely good.
Dravid did not stay long as well, got out for 28, replaced by Yuvraj Singh.

Yuvraj Singh couldn’t find his timing right. But made sure to survive against Muralitharan who looked dangerous. Despite scoring three fours for his 18, he played 24 deliveries, but that was enough as Dhoni took the majority of the strike, reached his 150 in just 125 deliveries.

After the fall of Yuvraj Singh, The Indian lower middle-order was exposed, something that comprised of Venugopal Rao, JP Yadav, Irfan Pathan. Players whom you cannot really rely on, with 48 runs still more to get. The only plus point was the run-rate. India was going at something around 6.5 runs per over, thanks to Dhoni.

22 off 36 now. Upul Chandana bowled two poor deliveries and Dhoni was quick to convert them both to sixes. The target further reduced to 2 of 24.

And with Dhoni on strike, you know the script. Yes, he finished off with a massive six and India from nowhere pulled an excellent victory, stood unbeaten at 183*. Dhoni was the difference between both the teams.

The guy with long brown hair did not stop after announcing himself against Pakistan. He proved that he was here to stay. From then on, He kept proving time to time, but after a decade, he did set a standard for himself, as a class apart. As a matchless. At that time, Who would have imagined that this guy with a weird haircut would go on to win the world cup for the country against the same nation, Sri Lanka?

Now, that being said, I was never a “big” fan of him, I don’t hate him either. As a cricket fan, it is disheartening to see him fail continuously. With an ODI more to go against the West Indies, I desperately hope that he gets something on the board.

“Because He Is BCCI Chief?”, Sunil Gavaskar about Virat Kohli praising Dada