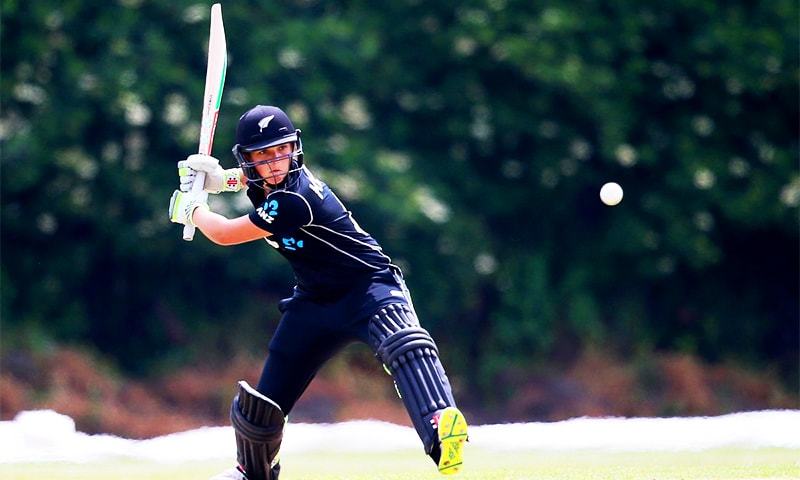 On this day (13th June 2019), Amelia Kerr became the only player to score a double hundred and pick up a fifer in the same match.

Some people are just destined to do wonders on the field. Every time she walks out to bowl, she carried the burden of expectations. Well, we cannot blame ourselves for that because she is just seventeen and I haven’t seen someone bowl googly as beautiful as Kerr does. Of course, When one can bag the international contract at the age of 16, the expectations are a must. Oh yes, she can bat, score runs faster too.

The White Ferns has one of the strongest batting orders in the world, and that doesn’t allow Kerr to get much batting, but on 13th June 2018, the stage was all set. Playing against Ireland, there wasn’t huge pressure and the White Ferns were piling up runs in previous matches as well with two four hundred plus scores.

Playing the third ODI, the White Ferns had all the license to test the batting of their lower order batters, the bowling all-rounders. The now-captain Amy Satterthwaite opened the innings along with the spinner Amelia Kerr. Kerr’s top score before the series was 30. She was promoted to open the innings in the second ODI where she smashed 81 off 45 deliveries. That gave the confidence to the then-captain Suzie Bates to stick with her for the opening slot. Satterthwaite walked back after adding 63 to the total and played a huge part in the first wicket stand of 113. Kerr was then joined by Leigh Kasperek. Yes, you read that right. It wasn’t any of the top batters but the fastest bowler in women’s cricket.

While Kasperek was hitting the ball hard, as she always does, Kerr was taking her time at the other end. Soon, she brought up her fifty off 45 deliveries. What followed was a thunderstorm over the Ireland team. Something they will never forget for a very long time and lesser did they know that their name would be on the history board forever for all the wrong reasons. Of course, it was not long back when the Indian team rattled their bowlers. Deepti Sharma and Punam Raut a top-class partnership and Deepti went on to make 188 against the same team.

Coming back to this match, the Kerr cut loose right after she scored fifty and a glorious late cut to the boundary took her to her maiden international ton off just 77 balls– one of the youngest to achieve the milestone.

The batting just got easier from there. Her 150 came up off just 102 deliveries, and more boundaries followed as she raised the bat for the fourth time on the day, after scoring an excellent double hundred. On the other end, it was Kasperek who slowly got to her maiden hundred and got out after making 113 off 105 with ten fours to her name. Kerr and Kasperek added the second-highest partnership in the women’s cricket that day. With some heavy scores, White Ferns crossed 400-mark for the third consecutive time.

Kerr, who was joined by Hannah Rowe and then Kate Ebrahim Broadmore who just faced only two deliveries each out of the 16 deliveries that were left when Kasperek got over and she was clever enough to give the strike back to Kerr.

After completing her double hundred, Kerr had only eight balls left in the innings and crossing Belinda Clark was the next achievement that was waiting to be unlocked.

For the past 21 years, Clark was all alone at the top. She had no company in the elite list of players to cross 200. She was the only one and had to wait until Kerr came in to give her company. In fact, Kerr wasn’t even born when Clark achieved 229*, a record that deserved more credits.

Kerr then scored 12 off four deliveries followed by smart singles. It all came down to 12 off the last three balls. With two beautiful fours and an innings ending six, Kerr made it. She became the youngest to reach 232*.

The claps overtook the announcements made at the ground and Kerr had no idea about what she had achieved that day before reaching the dressing room.

Once she reached there, all she wanted to do was to take a nap. After hitting 31 fours and two sixes and carrying the bat throughout the innings, it was going to hurt her. Remember, she was just 17.

After a tiny nap, Kerr went back to the pavilion with a smile and a thought in her mind that Bates wouldn’t make her bowl. She was standing at the slip and was enjoying her day.

It was her day. Even before she could realize it, Bates called her to bowl. It was hard for her but she really wanted to enjoy the game. While bowling the twenty-fifth over, She dismissed Raymond-Hoey in the final ball. Bowled. She didn’t stop there but went on to dismiss four other batters to pick up a fifer. The best part is all the five dismissals were bowled. What a sign if you are a bowler. She ended up with five for 17 in her seven overs as the White Ferns closed out with a victory of 305 runs.

With at least twenty more years left in her career, we sure are going to
see Kerr break a lot of records.

Madhavan and Simran reunite for Rocketry: The Nambi Effect

Never felt so calm going into season before: Virat Kohli