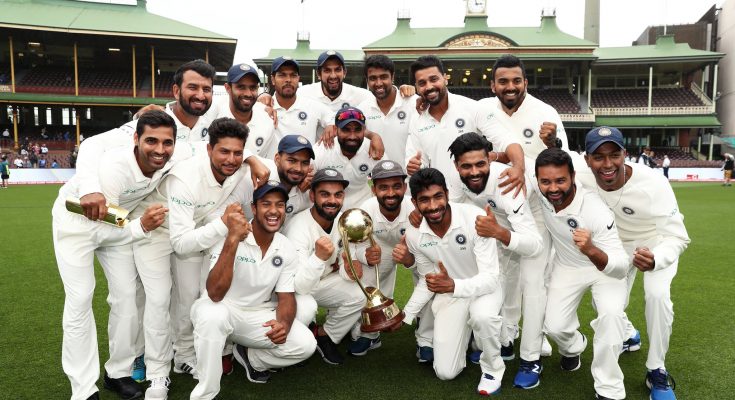 Winning a Test match in Australia itself was a dream for any Indian fan. There were so many instances where victory was in the grasps, only to witness a heartbreaking defeat. Last year, everything changed. India under Virat Kohli‘s captaincy won their first-ever Test series in Australia.

Cheteshwar Pujara tired out the Australian bowlers with his marathon batting. He made 621 runs in eight innings and batted for 209.3 overs. His century in the first Test at Adelaide was crucial in gaining the upper hand in the series. India suffered a heartbreaking defeat at Adelaide back in 2014, after which things went downhill. In 2018, India made sure that they cross the line and led the series 1-0.

In the second Test at Perth, India might have erred with a tactical mistake by not picking a spinner. On a pitch that was pacy and had steep bounce, Indian batsmen struggled barring the captain Virat Kohli’s batting masterclass. However, the Indian fast-bowlers were on fire. They peppered the Australian batsmen with short balls and to watch them hop around was quite a sight for any Indian fan. The result wasn’t in favour though, Australia held their nerve as they squared up 1-1.

Here’s the full compilation of the Test series win in Australia.

Going into the boxing day Test, India had flown in a direct replacement for injured Prithwi Shaw. Mayank Agarwal got an opportunity to play after plundering truckload of runs in the domestic season. Him alongside Hanuma Vihari, who was made opener for that Test, made sure that India survived the new ball burst. Yet again, Pujara and Kohli made runs with crucial contributions from Ajnkya Rahane and Rohit Sharma. Jasprit Bumrah led the attack with the ball and India took an unassailable 2-1 lead in the series. The dismissal of Shaun Marsh by Bumrah will be remembered for ages.

India was on the verge of making history. They only had to draw the last Test at Sydney. Pujara, who almost made a double century(193) and Rishabh Pant made sure that India batted only once in the match. Young Rishabh Pant took the Australian bowlers to cleaners and made a mammoth 159. Kuldeep Yadav starred with the ball for India with a five-wicket haul. As India enforced the follow-on, the last day was washed out due to rain and India won the series 2-1.

There was a lot of talk about the absence of Steve Smith and David Warner. However, it has nothing to do with the Indian team and the fact is that they outplayed the opposition that was put in front of them. Years down the lane, this day will always be remembered for the epic series win in Australia.