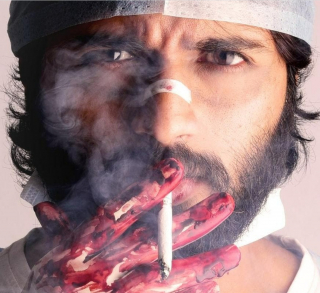 if we go through Telugu cinema, most of the actors gained “the star value” from their fathers or grandfathers.

An actor with no dust of shine is “The Vijay Devarakonda” who lived as Arjun reddy an year back.

The rugged beard, those raving eyes and his hysterical attitude towards sex made Arjun Reddy as “The Arjun Reddy”

There are people who watched this movie in loop mode also some were not quite fond of his character because ” all they understood was his cursing, kissing and boozing”.

But how a person who fails in anger management, who was never brought up with a sister falls in love with a junior girl and gives only six hours for her to decide after having sex for 550 times.

His way of sitting in front of a media crowd, shaking orange juice and hot drink with his round steampunk vintage glasses on made this character “a cult”.

Anybody who saw the movie would have not forgot, “Bloody 549th time” dialogue.

His friend Shiva was throughout in his hard times and his subtle comedy added flavour to the entire film.

When Arjun chases his maid, building an apparatus to “drink”, his royal enfield , when he finds a strand of her hair in bed, explaining how Preethi will console him after they fight, all these scenes are nostalgic and he carried the grey shade till the pre climax.

But such an arrogant Arjun Reddy really deserve a girl who was given only six hours after being cursed by her very own lover?

I hope Director Bala gives us all a twist in the Tamil Remake because every time we won’t get what we want. We should give things time to happen and patience is highly needed in any relationship.

Arrogance is the new trend travelling among the youth!