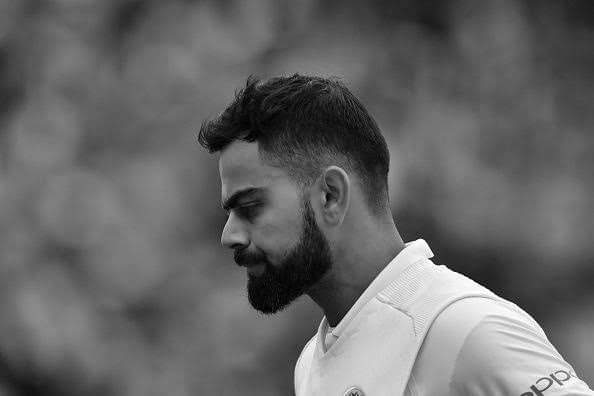 These are the words that belong to Virat Kohli.

The three years old Kohli was attracted by the cricket bat more than anything else and started to swing it while his father bowled to him. Things began at three.

A few years later when he was nine years old, His father took him to the coaching class, Thanks to his neighbours who suggested that he shouldn’t waste his time in gully cricket and instead should join professional cricket.

Then chubby Chekku was the first to hit the nets and was the last to leave. He would never leave the nets until he mastered a particular delivery which got him out in a match. Sometimes, the coach had to push him home. As the youngster, he was ready to take up any position in the batting order, as low as number nine and still performed.

While his idol, Sachin Tendulkar was smashing record in the international cricket, hardly 14-year-old, Virat Kohli started to appear on the newspaper. He was the top-scorer in the Polly Umrigar Trophy, averaging 34.4.

The captaincy always brought the best out of him, and it was evident at that age itself. The next year, he went on to captain his team and ended up with an average of around 75. It was too easy for him to get into the Under-17 Delhi team and he topped the run charts there as well. This was followed by the Under19 team tour of England and the series against Pakistan. He returned home with flying colours. Then coach Lalchand Rajput was super impressed with his stroke-play and determination.

The first big break for the big man came in 2006 where he debuted against Tamil Nadu in the Ranji Trophy. He failed to score big in the first match, and for someone like him, it was a big failure as he already was claimed the future of Indian cricket, and all the eyes were on Kohli. Once again, after hours of practice, he was ready to play against Karnataka. Lesser did he know that this match is going to change him forever, mentally.

He was told that his father, the man who forced Kohli to play cricket left him forever. Broken young Kohli had to make a choice that day. Either to go home immediately or to play. Kohli chose the latter. He showed his pain, anger and everything through that knock of 90 which turned out to be a Match-saving one.

His mother quoted: “Virat changed a bit after that day. Overnight he became a much more matured person. He took every match seriously. He hated being on the bench. It’s as if his life hinged totally on cricket after that day. Now, he looked like he was chasing his father’s dream which was his own too.”

From then on, every single tournament, every single match the graph of Kohli went upwards. Then came the Under-19 World Cup victory which earned him a ticket to the national team.

August 18, 2008, it was. Sachin Tendulkar’s and Virender Sehwag’s injury paved the way for Kohli for the first time. Who would have thought that the man who just the second choice those days, would go on to rule the cricket world like forever?

Kohli liked to dominate the game. So, after the retirement of Sachin Tendulkar, he slowly made sure that Sachin’s absence was not felt. He made sure that he was there for the team. The runs, the victory, the tons, the records followed him. He became the fastest to every almost every single milestone. He became the beautiful cliche of the international cricket that kept repeating over and over again.

The man who dominated all the formats had the weakness too. He became bunnies to the bowlers too, but his passion did not stop him. He conquered them all, when he did, he literally destroyed them. Now, there is no shot that he couldn’t play, no bowler is actually a threat for him.

More than his love for the game, the love for his country and the love for dominating the game keeps him going. He wants to be there at the top every single time he plays. He hates to give reasons, and maybe that why he became the fittest cricketer from ‘Chubby Cheeku’.

The age between 28-30 is always the best for the cricketers. A lot of records were broken and created at this age. The rising graph of Kohli shows us how he has dominated the game every year. His hunger to score runs in the longer format of the game is one of the reasons why Test cricket is surviving. More than ODIs and T20Is, he is the ambassador for the longer format and his love for the game which looks like never ending keeps the format strong.

The last few years were too good for both him and India. With the bigger picture, the 2019 World Cup is nearing, Kohli will not sleep until he wins the cup for the country.

If there’s a feather missing in his crown, it is the IPL trophy. Unfortunately, cricket is a team game, and he needs support from the other end like how the bowlers, Rohit Sharma, Shikhar Dhawan and occasionally middle-order support him in the international cricket.