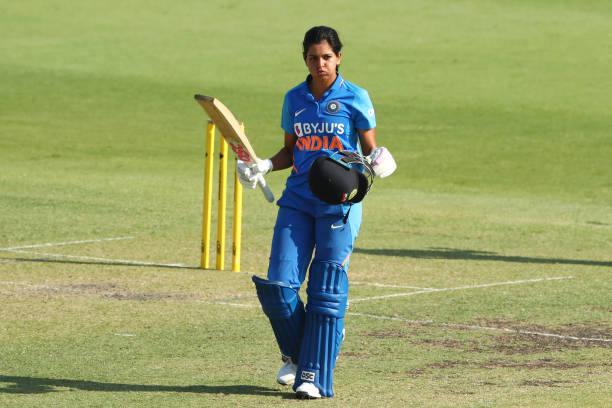 She moves towards the left, looks around for the field set-up. As the bowler goes back, she takes the guard, probably middle and off. A gentle tap until the bowler runs in to reach the umpire. Then she lifts her head a bit, watches the ball.

As the ball leaves the bowler, her right leg moves front and there is a beautiful lift of the bat. Her right leg and the bat moves in contrary motion. The bat stands still a bit before coming down like a rock falling from a mountain. Oh, it’s not free fall. It looks that way, though.

At the middle of the pitch, her bat meets the ball and you could hear the sweetest sound of the kiss. The ball pierces the gap and hits the fence. Now, everything happens within seconds. You blink, you miss but what you cannot miss is how everything comes together to produce a beautiful cover drive. She doesn’t end the shot there. The bat goes back behind her head. Of course, the sword has to go into the scabbard at the end, right?

Priya Punia probably has the most stylish cover drive when it comes to the Indian players. Her drive is addictive just like Kohli’s. Maybe, having the same coach did the magic. Oh, we’ll never know.

Priya Punia always had the knack of playing the beautiful shots. Of course, it did take a lot of practice and hard work and sacrifices.

The sacrifices begin when she had to give up Badminton for cricket. It should’ve been the toughest choice for nine years old at that time but no regrets there. Maybe, she would have hated moving places, blame her father’s government job. Rajasthan-Delhi-Rajasthan again and the lists goes on. However, one thing remained the same, Priya Punia’s love for cricket. In fact, her father’s love for the game.

He wanted his kid to make it because he couldn’t. He enrolled her to the classes and when he had to move back to Rajasthan, he built her a personal practice place. He had to give up his savings because… Dreams.

Priya Punia had performances to show for all the hard work. Her 95 runs against West Zone revealed potential and patience. India A call-up knocked. She stepped up there with a beautiful cameo and that was the beginning.
She wasn’t perfect at that time. She wasn’t even 19. However, for someone who always loved to be in the top-level, she learnt quickly. She learnt one thing at a time. Beginning from leaving the “tempting” ball, rotating the strike and playing lofted shots. One single thing at a time. And seniors like Mithali Raj and her Delhi captain Reema Malhotra had roles to play, be it advice or motivation.

The beginning of 2019 wasn’t a great time for India. The team was hunting an opener and with Mithali Raj-BCCI issue, things only got complicated. India’s search began and Priya Punia’s numbers were too good to be missed and there she was, in the next flight, travelling alongside the other Indian players. It was a dream come true. She should be performing. She should be proving herself. And… She flunked. India couldn’t win at least a single T20I match.

If you fail, you are lost and gone. As India’s search continued, Priya Punia’s work too. She went back to the basics, worked hard and a few months later, she represented India, although it is a different format, the ODIs.

It was the month of October and the match between India and South Africa was overshadowed by the jaw-dropping achievement of the Indian team captain Mithali Raj. She completed 20 years of international cricket on the same day Priya Punia debuted.

India was chasing a modest total of 164, thanks to Goswami who did most of the damage. Opening the innings with another youngster, Jemimah Rodrigues, Punia showed displayed her skills. Even though there were patches of mistiming and struggle, she managed to get to her fifty and later on, she was able to bat alongside Mithali Raj.

She took the team home with an unbeaten 75. It was a perfect gift for her captain’s achievement. In the next month, she backed it up with another 75 but this time a bit faster than the first.

Then there was a ton against Australia A where she not only played quick but also did well where most of the Indian players failed.

In 2020, well, you know the story. Thankfully, we are going to witness cricket again in a few months. Now, go, count the days before we all could see her back in action, her cover drive back in action.