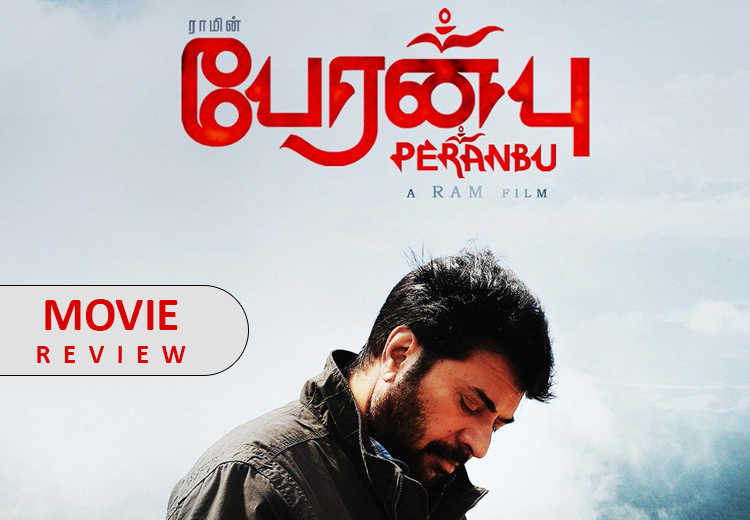 Peranbu (Big Love) is an affecting drama that is inscribed as chapters from the life of the narrator Amudhavan (Mammootty) and his daughter Paapa (Sadhna) who is with Cerebral Palsy.

The theme of the film is nature. Director Ram explores the nature in its real form. He attests that how the nature could be so cruel and also could be so generous. Ram exploits the various phases of the nature between these two extremities.

Amudhavan, a single estranged father, moves with his growing child Paapa to a remotely serene place away from the bustling city. A new life with a belief that something good could happen with this change in atmosphere. Amudhavan narrates the events in his life to the audiences, to enlighten us that how blessed our lives are and how it has not been the same way with him.

A sense of decreasing distance between Amudhavan and Paapa is captured in the beginning through the very theme of the film, the nature. The time when they team up to help a sparrow to find its way out of their house or the time when Amudhavan buys a horse for Paapa. Those moments bring them close to each other and they begin to forget the alienation that once existed between them. He installs a skylight window in Paapa’s room, to check up on her and finds Paapa still keeps her mother’s picture with her. The mother who left them because she couldn’t take the burden of the family anymore. He learns that her mother’s love can’t be replaced by him despite his wife’s abrupt departure.

Amudhavan as Mammootty gives out a realistic performance as always, accepts the nature as it is. His daughter’s predicament is the brutal form of nature. He understands that wailing in anguish is not going to change his crisis. No one but him is there to help Paapa with her needs. Nature couldn’t be stopped — couldn’t be questioned. And it is its way of proving that to a childlike girl who couldn’t help herself, has to rely on someone to help her during her periods, to change sanitary pads. Paapa as Sadhana has amazingly conveyed her emotions without words. Viji (Anjali) briefly enters their lives, gives them hope that, they two, aren’t alone anymore in this world, only to leave them to confirm that nothing lasts when Paapa is just starting to love Viji and begins to forget her mother’s picture. Amudhavan sees this as an another event in his life in which people shower the children like Paapa with their love to seek solace with Paapa’s distress and leave abruptly when their time comes. Those children don’t understand why and how people could leave but it is a puzzle itself to Amudhavan too. He is uncommonly calm during all these phases. He is not disgruntled at the nature, at the world. He says everyone has their reasons to act the way they do. A clever scene represents what the whole film has to say — When Amudhavan and Paapa are trying to count the stars on the night sky but fail and later on another night, they both lie under the skylight window and count the stars that exist in a confined area. It is as if the Director Ram says that Nature may throw as many tides of troubles as it could, but I have learned to count my happiness in a small space. Yuvan’s music and Theni Eashwar’s cinematography are as arresting as the beauty of the nature. Ram has impeccably played the compassion and heartlessness qualities of the nature.

Amudhavan’s vulnerability and anger is not much explored when he is let down. He moves back to the City where Paapa can’t look a calm lake, where she can’t hear the sounds of birds, where she can’t play with her horse. She is made to stay in a room with a television to entertain her all day.

Anjali Ameer (Meera), a transgender sex worker is one of the kind human beings that Amudhavan and Paapa have encountered in their life. Paapa learns now that she must feel something towards men from what she sees on the TV. Her capacity of sexual feelings is explored. it is another form of the Nature’s cruelty. Amudhavan begins to hate the Nature now as there is no prospect in his daughter’s future but all the humanly desires don’t wait to listen to them.

After a series of chapters from Amudhavan’s life, deep despair is being seen rooted in his life and it is seen how he is trying to search for the benevolence and love that this nature has to offer to its mankind. We want nature to be kind to them too. It is the known trait of life where there is no lasting happiness that nature could offer. We just want someone by our side to catch us when we fall. And it is when nature would seem warm enough to make us go by each day. Peranbu is an excruciatingly painful watch and it leaves us with a wound which would never heal.

Sethum Aayiram Pon Netflix [2020]: A deeply felt portrayal of death and its indispensability to life