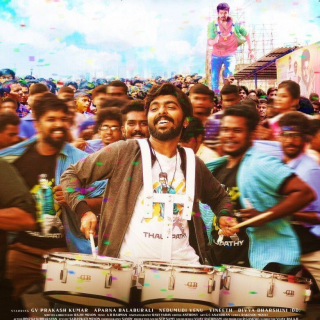 While we are all hung over with Petta album that released on Sunday, Monday had three song releases as well. Maari’s Aanandhi from Maari 2, Adchithooku from Viswasam and there were ‘Peter Beata Yethu’ from Sarvam Thaala Mayam.

The GV Prakash starrer has been on talks since its premiere at the 31st Tokyo International Film Festival. Directed by Rajiv Menon, the movie has music by AR Rahman.

The song ‘Peter Beata Yethu’ is sung by the actor G.V. Prakash himself along with Satya Prakash, Arjun Chandy with lyrics crafted by Arunraja Kamraj.

Sarvam Thaala Mayam will be hitting the screens on 28th December as a new year special.