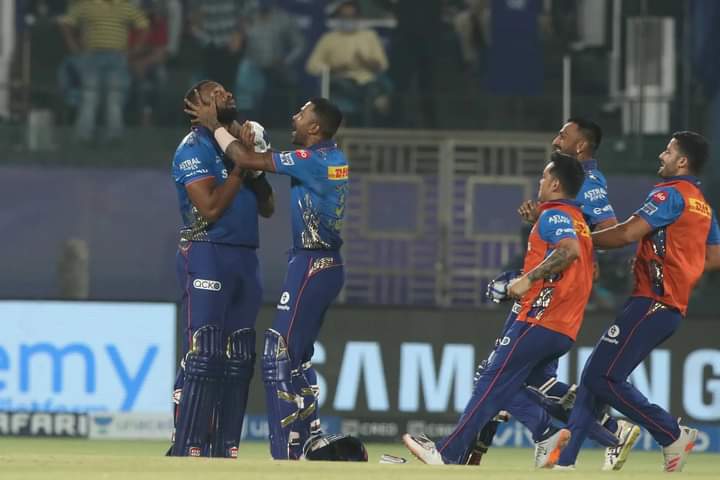 As Pollard cleans the surface and adjusts his gloves, he knew he had a mammoth task ahead of him. He taps a couple of deliveries to adjust to the pace, perhaps he didn’t want to overpower them as he feared breaking the bat. He moves a little to see the scoreboard and clears the pitch again.

There are some players who let you know about their mood. They panic when they see the total on the board. They try just too hard only to make a mess of everything. With Pollard, one will never ever find out what is up with him. He is the epitome of confidence and a true lover of his own game. As he simply puts it, he is a “very very confident person”.

He then manifests that confidence to Krunal Pandya, the bigger one of the two brothers who had adored Pollard more than anyone else in the team. Krunal is equally capable of clearing the field and he shows that right away with a straight hit over Thakur’s end. Thakur comes back with a couple of good deliveries and Krunal gets beaten. Pollard goes to him tells him something and Krunal straight away punches it for a couple and then gets down to the other end by hitting the ball to the vacant point.

If one scores a six in the 12th over, they don’t usually try to hit another one. With the field being spread, they would prefer a single unless the delivery is bad. Today, every single ball had a role to play. Pollard knows this delivery does too. He walks back and forth, gets stuck still finds a way to get back to the other end.

The scoreboard laughs at Mumbai Indians as the run rate keeps climbing up. Pollard sees it once again and clears the pitch. A couple of singles later, he knows it’s time. He marches towards the leg side and Jadeja bowls one closer to the wide line. Now, Pollard has got an excellent reach. He crouches in his stance and routs it over long-off. Sweetishly aggressive.

Pollard once again moves across and Jadeja bowls it wider than the previous delivery. Still, Pollard reaches it only to find the under-edge. This was probably the first time you can read his face. He was a bit disappointed. He was kicking himself but that didn’t last long as he brutally kills the next delivery. It was above the deep cover. Even though it wasn’t from the middle of the bat, Pollard had muscled it to take it over the boundary. Jadeja bowled one as if he gave up. The ball was right in the slot for Pollard this time, he makes it look super easy as he gets another six.

Ngidi had to vary the pace for Pollard. The latter doesn’t read it still gets a single. Krunal, similarly, couldn’t read the next one finds his second single of the over. Ngidi had visibly enjoyed the win in the first three deliveries. There were claps, tension, sweat all-round but once again, Pollard wasn’t showing any, although one can read the ‘Wait for it’ signal.

Ngidi messed this one up and Pollard left his bat to do the work. He waits for it, takes it over the deep square leg and follows it up with a perfect punch over the long on. He then taps it for a single to keep the strike.

Thakur wants to keeps it completely wide from Pollard. As a result, there were times he ended bowling it too wide. He couldn’t do much, blame Pollard, his power and his reach. Thakur accepts Pollard invitation and bowls a slot ball next. He sents it back. Though not from the sweet spot, he would take a 103m six any day. Three fours and a couple of singles later, Thakur’s disappointment was out there to everyone.

Nonchalantly standing at his crease, Pollard changed the course of the game with that over, took him for 26 runs. The momentum was stolen but still, a lot was left to play.

Ngidi comes back and this time, Krunal takes him for a six, thanks to the top edge. Pollard runs to Krunal to go for it. A couple of fours later, the wry smile on the face of Ngidi had the answers for all the questions regarding the pressure.

Sam Curran comes back. Now, he is a fighter too. He loves challenges and Pollard is the biggest challenge of all. He comes up with perfect deliveries, exchange words with Pollard, takes Krunal with him and leaves by giving away just two runs. Now, Pollard hates these kinds of bowlers. He doesn’t like those who make him bend, most importantly, those who talk. Sam Curran did that all.

Despite mauling, Thakur came back to bowl his next. He welcomes him with a six and a four. A couple of punishments and then a couple. Thakur finally finds the right delivery but Pollard was riding his luck so much that Faf drops a catch. Yes, Pollard was hammering everyone but you see that every other day. You don’t usually get to see Faf du Plessis drop a catch. It was more of a sitter for his standards.

This was supposed to bring down Mumbai’s confidence and with a new man at the crease, CSK would have thought that they had it but it was Hardik and a couple of sixes off Sam Curran took the game closer. He left after a good cameo only to leave 16 runs from six deliveries.

Pollard doesn’t even look who comes in the place of Hardik. All he knows is that he is going to be on the strike. He doesn’t even try to take a single in the first delivery, rightly so. Out of nowhere, Nat-Meg appears in the next delivery to take the ball for a boundary. Perhaps, Ngidi was stunned by the beauty of that stroke and bowls a full-toss and that wry smile was back. Pollard was so much in the zone that he avoided a potential couple to leave it to the final two deliveries. Eight off two didn’t look so bad at all and Pollard wallops the next full-toss over backward square leg.

As he faces the final delivery, Dhoni doesn’t bring the field in and Pollard, being smart enough, touches the perfectly nailed yorker, runs a couple with ease to take the team home.

When someone plays an innings like this, they usually end up with a fist pump or bigger celebrations like this but for Pollard, it was his bread and butter. A decade ago, Pollard would have done things differently. He would have been more aggressive, more expressive. He isn’t that guy anymore. That guy was brave, brave enough to turn down the country contract to freelance when T20 was still in infancy. The revolution he led is all out there in the books of records and most importantly, in the confidence of cricketers who can forego a country contract to take up freelance cricket.

Decades later, he had filled his trophy cabinet and had led every single team he had represented to the title. Perhaps he is just too tired these days. Today, he didn’t do any of them, stood there, looked up and prayed. Then he embraced all the hugs he got from his teammates.

IND vs AUS: Steve Smith misses training due to back soreness