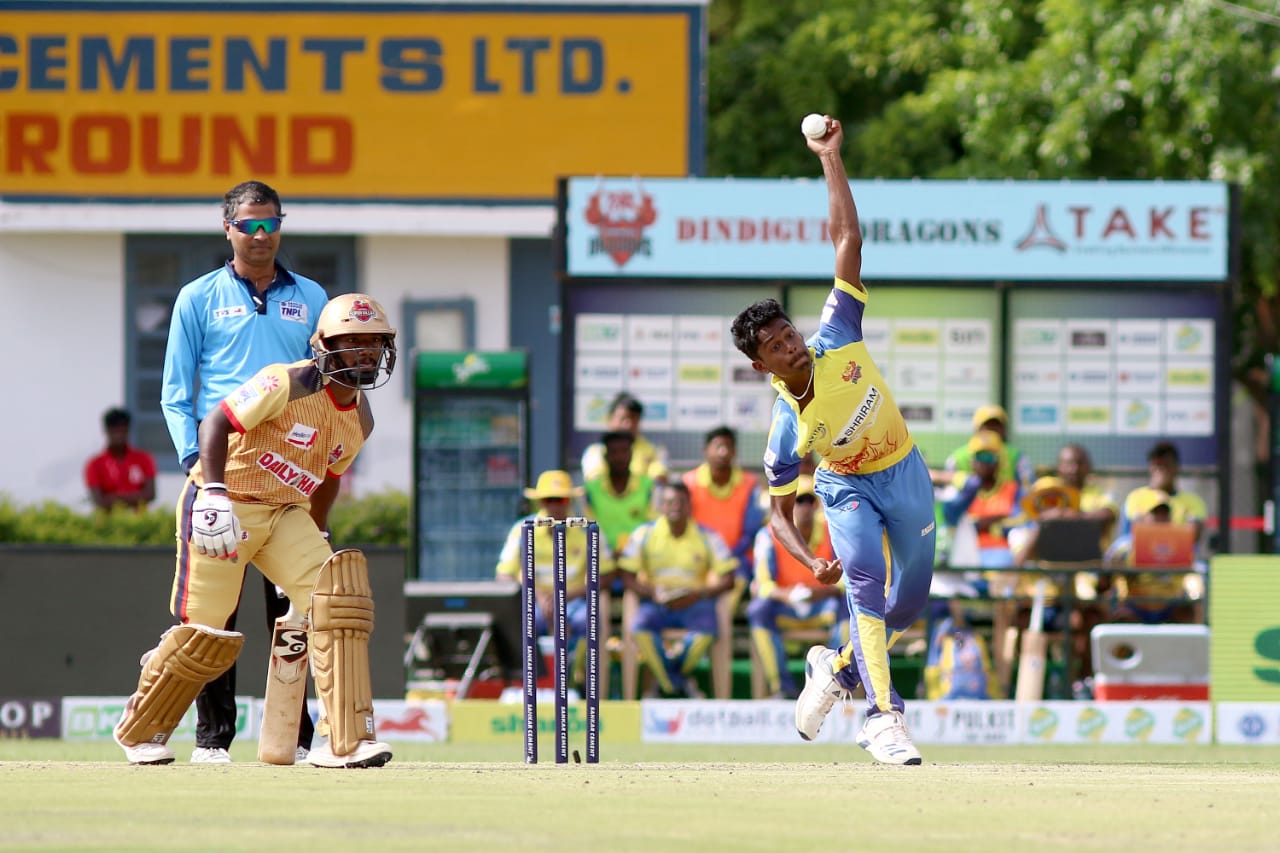 September 2013, a 14-year old kid was playing tennis ball cricket at the Government High School of Walajapet, Vellore. The kid was spotted by Jagan Babu, who had a coaching academy nearby. Jagan prompted this kid to practice in his nets, foreseeing a long term talent.

August 13, 2019. Dindigul Dragons faced Madurai Panthers in Qualifier two of the Tamil Nadu Premier League 2019 edition. Their captain R Ashwin left for national duty. In the absence of the captain and premier spinner, M Silambarasan, a 20-year-old left-arm spinner, took the onus on him to do it for his team. He bowled four overs and took three wickets at an economy of 4.5 and took his team to the finals.

Silambarasan was the kid who was bowling with a tennis ball six years ago. Life has grown leaps and bounds for him. It hasn’t been an easy ride though. It was a story of perseverance, hard work and unassailable passion towards the sport. Silambarasan talked to Penbugs about his journey from tennis ball cricket to TNPL, which is full of emotions, despair, pain and of course pleasure.

Back then, Silambarasan had to sneak his way to Jagan’s academy as his parents didn’t allow him to play. He attended practice every day in the name of special classes. One day, his elder brother got suspicious and caught him red-handed in the academy. That kept full stop to his journey.

A year later, he somehow managed to convince his parents to practice cricket. He promised that he will not lose out on studies while playing cricket. Jagan ran the academy free of cost, helping the kids in the neighborhood. They had to pay Rs 30 as a ball fee and other facilities were provided by the academy.

Mohan, a senior of Jagan, noticed Silambarasan. Mohan took him under his wing and Silambarasan started playing for Ranipet Rural Cricket Foundation(RRCF), famously known as Jawahar CC. “We used to practice every day in the evening. On weekends, we practiced from 6.30 am in the morning to 6 pm in the evening. We never had breakfast in those days and hardly ate lunch. We just drank water and practiced all day“, says Silambarasan.

Life wasn’t easy for him. His family was not in a situation to afford sports as a profession. It was his mother who worked ever since he knew, as they were struggling to pay the school fees. It was a government school and they had to pay a sum of Rs 800 per year for him and his two brothers. He was hesitant to talk about his family. Only after some insistence that these stories should be told, he spoke. His oldest brother Kaviyarasan started working right after school. Kaviyarasan did his under graduation in correspondence in order to support Silambarasan’s dream and his family. “I owe everything to him. He has always been there, supported me in the worst of times and dedicated his life for our own good“, acknowledges a teary-eyed Silambarasan.

Kaviyarasan himself was a state-level volleyball player and his second brother is also a state-level football player. Both of them sacrificed their sporting career for the growth of Silambarasan. Kaviyarasan is currently working as a sales manager in LG. He is the one who’s taking care of the other two brothers.

While practicing at RRCF in 2015, Silambarasan didn’t get enough opportunities to play for Madras Emmanuel Club in fourth division. In the only match he played, he bowled only one over and conceded 14 runs. It was his first experience on a turf wicket. His coach Mohan was furious and made him practice harder. Silambarasan credits a lot to Mohan. “In the past four years, six players have gone on to play TNPL from Mohan sir’s academy“, he says.

2016 was the life turning year for Silambarsan. He moved to Mylapore Cricket Academy. He was playing in the third division. After three matches, he had taken only 4 wickets and that’s when the news broke. He had applied for TNPL trials and Dindigul Dragons picked him in the last draw.

“I thought it was a joke when I came to know. It was quite shocking, to be honest. I was really happy and it motivated me to use this opportunity. I went back to Mohan sir, worked hard and ended up as the leading wicket-taker for MRC-A, with 22 wickets in the remaining six matches“, explains Silambarasan with the same amusement.

The first time he played in TNPL was an eye opener for Silambarsan. He felt out of place in those five star hotels where the team stayed. “It was the extreme opposite of my world. Venkataramana sir helped me a lot and slowly I started picking up“, he said.

He played just one match in the first two seasons. Only in the third season, he started playing regularly. And whenever they could play only one spinner, he missed out for Ashwin. In 2019, he took 14 wickets at an average of 16.64. He was the leading wicket-taker for his team.

It was a great learning experience for him sharing the dressing room with players like Ashwin and others. “I learned a lot and started applying things in divisional cricket and it provided rich dividends. I started picking wickets regularly after that”, he added.

Ashwin has a tremendous influence on these cricketers. He backs them to the core and emphasizes on playing fearless cricket. “Ashwin na(brother) observes us always. And suddenly he will come up with something, which we never thought about. For him, it is all about playing hard and winning every game. Even in this season, Ashwin na asked me to try certain variations and it helped me to keep the batsmen quiet. His on-field tactics are spot-on”, Silambarasan elaborates his relationship with Ashwin.

Silamabarasan speaks high of the team environment and their coach M Venkatraman. They always stick together as a team. He hardly spends time alone there and they have a lot of fun. Dindigul Dragons are more like a family to him. Coach Venkataramana is like a father figure to him.

From where Silambarasan started, it is his cricket and the oldest brother, who are helping the family financially. He credits a great deal to TNPL and the financial opportunity it presents to players like him. He emphasizes that it is because of TNPL, his family is running without major financial issues. Players like T Natrajan have also been a great support to the players who come from rural backgrounds.

He credits his life to Kaviyarasan and vows to satisfy him. When an appreciation comes from his brother, nothing else matters to Silambarasan. He also feels that, if his family is able to understand that cricket is a sport with ups and downs, he would be even happier.

Currently playing for Swaraj CC in TNCA first division, Silambarasan aims to play Ranji Trophy in the next few years. “I definitely want to play Ranji trophy for Tamil Nadu in next two or three years. That’s my first goal right now. Hopefully, I will make it and I can take it from there“, he concluded.

It is amazing how Silambarasan has reached where he is now, despite all the difficulties. Credits have to be given to all those, who helped a hand along the way. Like he keeps repeating, it is his hard work and perseverance that has helped him all along. We wish his dreams come true and he continues to inspire more Silambarasans like him.

Most players used to avoid me: Sreesanth