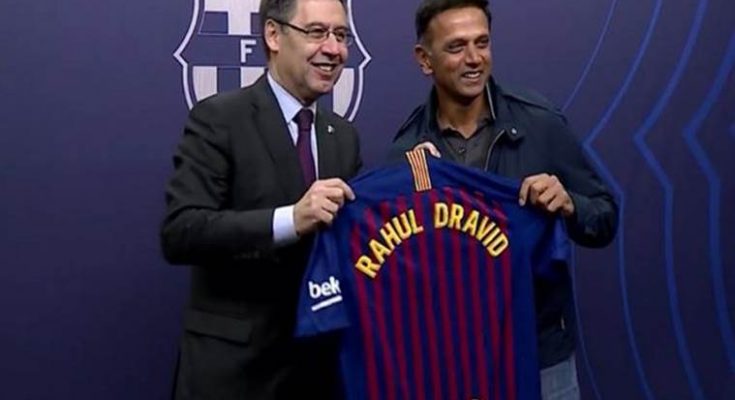 The former Indian cricketer Rahul Dravid recently was in attendance for the La Liga match between FC Barcelona and Atletico Madrid at the Camp Nou on Saturday.

“It’s incredible, it’s a huge honour, it’s one of the things I’ve always wanted to do, come to Camp Nou and watch a football game. To be here and experience the atmosphere, it’s absolutely electric. To be able to watch players like Messi and Suarez play live, it’s fantastic for me and my family,” said Dravid in a video posted on by Barcelona on youtube.

Dravid was presented with a customised Barcelona jersey after which the 46-year-old along with his family watched Barcelona beat Atletico Madrid 2-0 at the Camp Nou.

Dravid added: “Cricket is a different game. We have a great atmosphere and a great crowd in the IPL and a lot of Test matches as well. Cricket is the No.1 sport in India but football is catching up very quickly. The ISL, the new league there since the last few years, Indian football is catching up, but yeah, this was a lovely atmosphere to watch. Similar to some of the IPL games that we have.”

The U19 coach is currently the brand ambassador of Bengaluru FC, the current ISL champions.