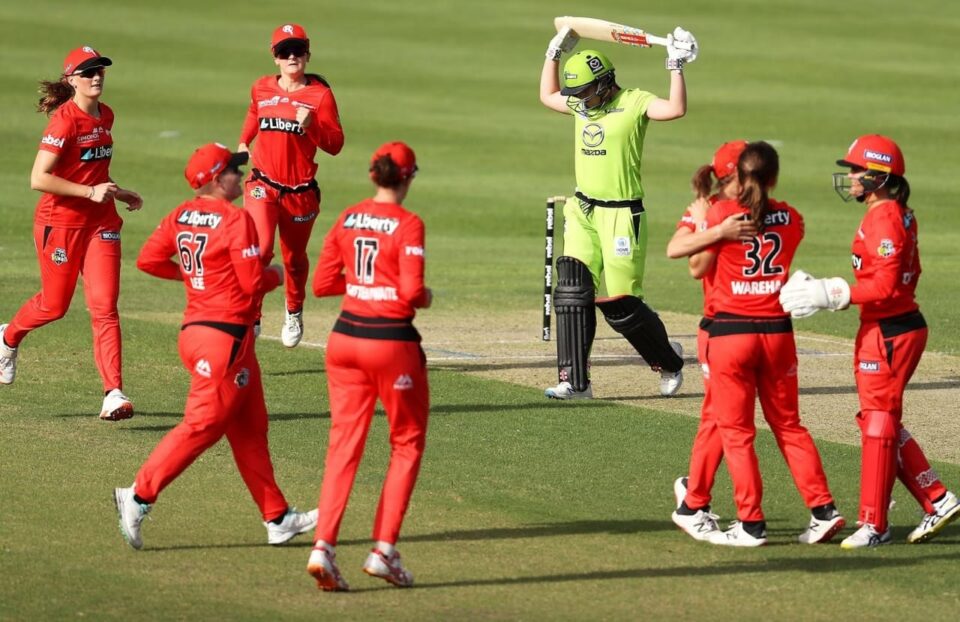 Sydney Thunder wanted to field first after winning the toss. Lizelle Lee blasted few sixes before getting out to Sammy-Jo Johnson for 20 runs. Amy Satterthwaite joined Sophie Molineux at the crease. Owing to the fact that the pitch was slower, they played defensively. Satterthwaite departed for 19 runs. After that dismissal, Wicket kept falling regularly.

Courtney Webb (1 run) has been run out by Trenaman. Molineux (34 runs) was outdone by a spectacular return catch of Lauren Smith. Josephine Dooley (2 runs) cleaned up by Johnson. Upcoming All-rounder Georgia Wareham got knocked out by Samantha Bates. Renegades were bowled out for 110 runs. Sammy-Jo Johnson took her first 4-fer of the season. Sam Bates and Lauren took 2 Wickets each.

It seemed like it’ll be cakewalk for the thunder who have been Undefeated in the tournament so far. Tamsin Beaumont & Phoebe Litchfield started the chase. Kiwi bowler Rosemary Mair, on her 22nd birthday struck in her very first over by dismissing Beaumont (5 runs). Then she sent Sammy-Jo Johnson to pavilion without troubling the scoreboard. Litchfield & Heather Knight tried to keep the team well on course. The plan got diminished when two Wickets fell in the 9th Over.

Molineux shined once again in the match, this time with the Ball. She dismissed in-form Knight for 19 runs. Wareham’s direct hit sent back Rachel Haynes (3 Runs). After that, Thunder innings never took off. In the final over, Lauren Smith did try to give a mighty scare by scoring three consecutive boundaries. Mair held her nerve by giving away only 4 runs in next 3 balls. Rosemary Mair ended up with 2/23. Molineux got 2/19. It was a complete bowling performance by Renegades. Finally, Renegades have been back to winning ways.

Abhimanyu Mithun picks up 5 wickets in an over!