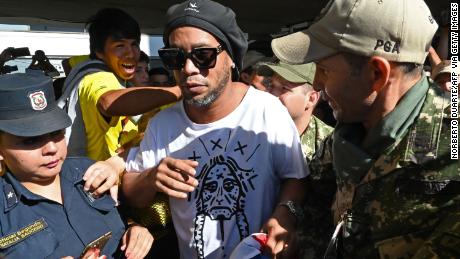 Football superstar Ronaldinho and his brother Roberto de Assis has admitted the possession of altered passport but Paraguayan prosecutors will not charge them as they agreed to face an alternative punishment.

Prosecutor Federico Delfino said the brothers recognised they had committed a crime but said they did so unwittingly. “We are looking for an alternative way out of this that doesn’t result in a formal accusation and that recognises that these people were, we can say, taken by surprise,” Delfino told reporters in the Paraguayan capital.

Ronaldinho, 39, and Roberto de Assis, 49, were detained after police raided their presidential suite at the Resort Yacht and Golf Club, around 15km south of Asuncion, late on Wednesday, reports Xinhua news agency.

“Mr Ronaldinho has a false passport. That is a crime and that’s why his arrest has been ordered,” Paraguay‘s interior minister Euclides Acevedo told local radio station AM 1080. “I respect his sports popularity, but the law needs to be respected no matter who you are.”

The brothers were invited to Paraguay by a local casino owner and had arrived on Wednesday to take part in a soccer clinic for children and a book launch.

5YO dies after hot Sambhar vessel falls on him

Asteroid to fly close to Earth today, no damage will be caused: NASA