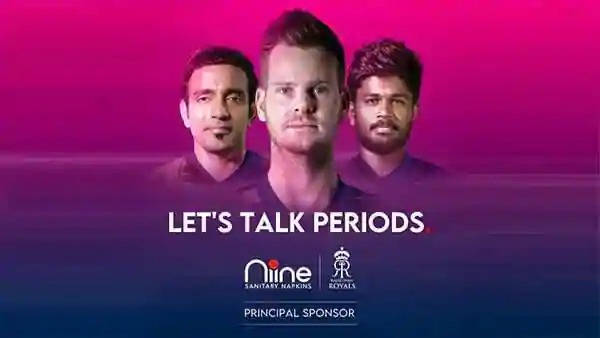 Rajasthan Royals, who will begin their tournament against Chennai Super Kings, have announced a campaign called “Make every run count” along with their principal sponsors Niine as a commitment to make Menstrual Hygiene assessible to all.

In this campaign, for every run that Rajasthan Royals score, their sponsor Niine will help nine girls with mentrual Hygiene.

This campaign was initiated to encourage the players to score more, not just to win the match, but also to make a difference in the society.

The campaign will be available across all the format and the fans will be able to see them too.

Rajasthan Royals is the first team to be sponsored by sanitary napkin brand.

“Considering IPL’s global appeal and Cricket being the most watched sport in the country, it provides the perfect platform to address health and drive social change, which defines Niine. Along with Rajasthan Royals, we are confident to be the game changers that will help educate men through the IPL 2020 season by building not only awareness but also a level of understanding on a grand scale,” said Sharat Khemka, Co-founder at Niine Hygiene and Personal Care.

The silence and stereotypes that surround menstruation in India is a consequence of years of cultural conditioning and this move is a step towards normalising a conversation about what is a biological process. More importantly, this brings the conversation out in a space largely inhabited by men,” added Sharat Khemka.

Rajasthan will be wearing Purple as well as blue colour in their jersey. Colour Purple represents the mixing of gender normative colours pink (cis-gender femininity) and blue (cis-gender masculinity), further emphasizing a perfect balance between the two genders.