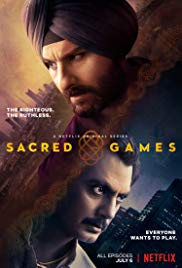 So if you are a person who loves to see raw violence, reality to the dot, the darkest grey shade of Mumbai, then this pick is right for you.

Nobody other than Nawasuddin Siddique can do this. I swear!

It was based on a novel which goes with the same name written by Vikram Chandra.

The depth of the story, intricate detailing of the characters makes us watch every other episode continuously. You will definitely need some time to rethink, to digest the episode which you would have watched that time as each shot is intense and needs lots of analysis to understand the raw extract of Mafia and gang-war.

If you just use your mobile and listen to the audio or stare your laptop once in a while when the episodes are playing, all you would see is boobs, butts, and

Nudity is throughout the series. IF you can handle it, watch it. If not, I would say NO.

We would have seen Saif Ali Khan underplaying in all his movies. Even in this series, he has no scenes where he could prove that he is good in emoting but his subtility will take him places because the role needs subtleness, not expressions.

Ganesh Gaitonde (Nawasuddin) is a criminal overlord who dies in the first episode after giving a clue about his next attack in Mumbai to Sartaj Singh (Saif). Sartaj is a police officer who is loyal to his job. His loyalty is giving him troubles. A constable travel along with him to discover what really the cataclysm is about.

This is how it starts and travels gradually and makes us photograph every single frame.

Every city has a dark side and Bombay’s low hill was said in a strategic way.

The layering of characters especially Radhika Apte who acts as a RAW officer did perfect justness to her role. Kubra Sait as Kuku did a remarkable job.

All the episode names have to be googled to know what it is really about. They have a glance at our historical epics and that is what the entire story is about. How religion is connected to our deeds, how we were taught and how we act as an adult. Every question was asked by Gaitonde and he gives us an answer too. We have to decide whether we need to accept or not.

It resembles NARCOS -An American series which was set and filmed in Colombia is also about the saga of a gangster. The structure of the series was built by keeping Gaitonde in the base which makes us love NAwasuddin as an actor and hate him as he really lived as Gaitonde.
We may love and read history again if we understand what is the message behind every dialogue in this series.

If this series reach more people, we may get many Indian Netflix original series of this standard.

Thank you Anurag Kashyap and Vikramaditya Motwane for this great series and we are eagerly waiting for Season 2.

Psycho Trailer is Out | Penbugs

KS Ravikumar on Parasite-Minsara Kanna comparison: I selected an Oscar-worthy script 20 years ago!

Rest in Peace, the king of wordplay!