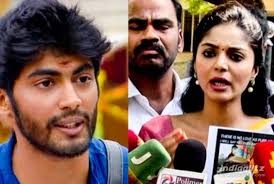 Sanam Shetty has reportedly lodged a police complaint against Tharshan at the Commissioners Office in the city. She said in her complaint that Tharshan has refused to marry her.

She added that the couple were already engaged and was supposed to get married last year, however, Tharshan had Bigg Boss stint at the same time that pushed the marriage date. Later, when he came out of the house, she said that the model did not treat her properly and even went on spread rumours that she is having an illicit relationship with her costars.

Sanam Shetty has stated that she even went to Sri Lanka to speak to Tharshan’s parents but they did not do anything to help her.

In a video, she stated that she wants Tharshan to marry her because she helped him out with his career.

Meanwhile, Tharshan has just signed his first movie and the announcement for the same will be made soon.

Also, the model will be holding a press conference on Saturday regarding the issue.