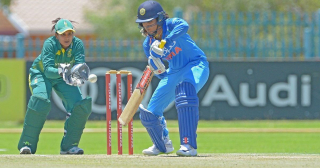 Another match, Another win for the women in blue.
After the massive win in the first match, the Indian women were positive moving into this match, whereas the hosts were in the danger of suffering the series loss at home.

India was put in to bat by Dane van Niekerk considering the conditions. The pitch seemed to be a slow, batting track.
India started well with a 56 runs first wicket stand.

Punam was caught behind by Trisha on 20 off Klaas. She was the first wicket to fall. Another fifty odd runs partnership for Mandana but this time with ever-dependable Mithali. The captain was caught and bowled by Luus on 20. Mandana went on to score 135 off 129 before being caught behind off Ntozakhe.
Harmanpreet Kaur and Veda Krishnamurty guided India to 302 runs.
Kaur scored unbeaten 55 while Veda smashed 51 off 33. Impressive to see both the Indian T20 specialists came back to form.

Chasing a huge total of 303, Lizelle Lee and Wolvaardt started well, but the partnership didn’t last. Jhulan Goswami broke through Wolvaardt to claim her 200th WODI wicket, the first player to do so.

Some good bowling from the Indian spinners made the hosts to lose wickets at regular intervals. Lee smashed 74, but unfortunately, she had no one to support. Kapp was the second highest scorer for the team, she was unbeaten at 17.

With this massive win of 178 runs, India not only sealed the series with a game to spare but also moved second in the table of ICC women’s championship journey to World Cup direct qualification. India with a net run-rate of +2 is only behind Windies, who played and won three matches.