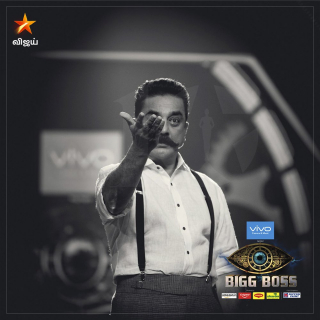 I never even thought of watching Bigg Boss when it was aired. But after a strong compulsion of my friends and family who are also a part of Oviya Army, I decided to watch in hot star and after the finale one good thing happened and that is admiring KAMAL HASSAN. I never watched for Oviya or the hype the contestants created. It was only for Kamal!

Now, I started watching season 2 and it is also going to be for him. But compared to season 1 more stars are studded in this season and have become more richer and interesting. So here is the list of the contestants and the very first contestant is my favorite!

IAMK fame! and I love her right from Dhruvangal 16! She is building my hopes and I am badly waiting to see her “stay” in future episodes.

So here is the second contestant who entered the bigg boss house. We have known him for ages and he is known for his performances in “Nattamai” and “Muthu“. We all trust that he dont hold grey shades in real life.

Mankatha Dawww!This is how we know Mahath and hope he does justice to the opportunity he got.

“Friend love matteru, feel aayitapla Half sapita cool aayiduvapla” (Sorry if this dialogue is wrong). This is how we all know Daniel and we wish him all the best to survive in that house.

I have never known this girl until my mom said about the Savi Magazine. After a small research, came to know that she is also a journalist like her grand dad. So she is the first journalist to enter Bigg boss.

He is our all time favorite in Super singer and he is going to get a new experience in Bigg Boss.

She is the grand daughter of N S Krishnan and we all love her voice in “Sattru Munbu” song in Neethaane En Ponvasantham.

This “Moodar Koodam” star has been a villain and a character artist in many movies and he is all ready to increase his fame by entering Bigg Boss.

“Kushi” made her to steal our hearts that time and she is going to do that again!

The “Dhaadi” Bhalajie entered Bigg Boss to show his true nature and he is the twelfth contestant.

Wife of Dhaadi Bhalajie– This is all we know about her and she entered Bigg Boss with so many good notions. Lets wait and see.

Never knew that he acted in a movie called “Pencil”. As of now, all I know is that he is the son of Uma Riyaz and Riyaz Khan and we wish him all the best.

So this is the list and we all are waiting for their performances in further episodes and hope Oviya gives useful tips to stay in the house as long a person can. Lets all wait and watch the good and bad in them.