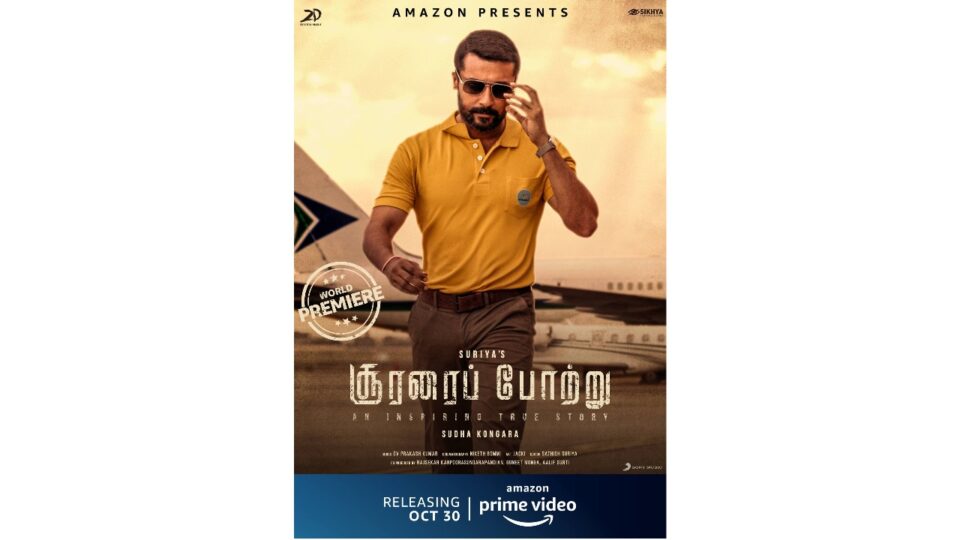 Suriya’s upcoming film Soorarai Pottru to have digital release and the rights for the film is bought by Amazon Prime for a whopping amount.

The film, directed by Sudha Kongara, was supposed to hit the screens in April. However, due to the lockdown imposed by the government, the film could not have a theatrical release. The latest development is that Soorarai Pottru will have its digital premiere on October 30.

Earlier, Suriya’s 2D entertainment’s Ponmagal Vandhal which starred Jyotika as the lead was also released by Amazon Prime. This was one of the biggest films to have an OTT release and when the announcement was made, there was a controversy as well.

Actor Suriya while wishing his fans on Vinayagar Chaturthi also shared the news.
Suriya, in a statement, said, “The moment I heard the script from Director Sudha, I was sure it has to be told and I wanted to produce this film under 2D Entertainment. Essaying Capt. Gopinath’s character came to me as a challenge, but we are very proud of our final product! I am glad that audiences across the world will be able to watch Soorarai Pottru, on Amazon Prime Video from their homes in these unprecedented times. This film is our labour of love and I am happy that it will now entertain the global audience.”

Bigil to release on Diwali

My vulnerability and sensitivity are my biggest strengths: Aditi Rao Hydari