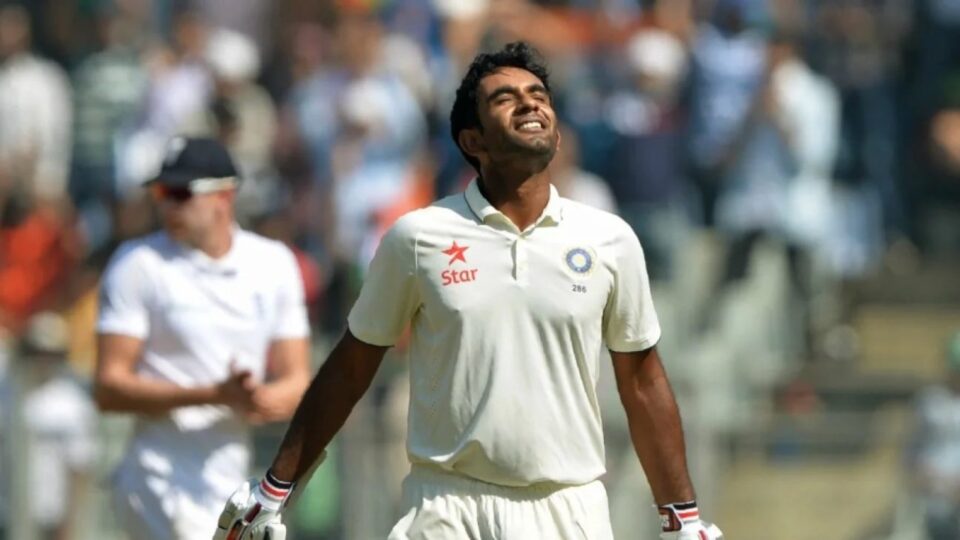 International debut doesn’t happen for many. Not many impress the world in on their debut series too. In fact, some of the best players had forgettable debut series but then went on to have a decade-long career while some never returned after delightful debut. Jayant Yadav is one of them.

Yadav was very young when he lost his mother. His step-mother then became the main reason behind his cricketing success. She was always there for him and made sure that he got everything. Yadav soon climbed through the age cricket and then made his first-class debut in 2011. He immediately made heads turn when he grabbed six wickets on his debut to help Haryana win over Gujarat but went nowhere in the next two games he played.

While his bowling abilities were the talking point of his career, he showed the world that he is more than just a finger spinner when he teamed up with the then Haryana captain Amit Mishra to produced one of the greatest stands. Both Mishra and Yadav made a double century in the 1st innings of 2012 Ranji Trophy against Karnataka. The match ended up on a draw, but the first innings lead gave the advantage to Haryana.

A couple of games later, he found himself playing in a first-class match against the touring side of England. He ended up picking four wickets in the 1st innings, including the wicket of Cook. With every single match, he kept showing up in hope that someone would take notice of him.

Ashwin had a part to play in his career too. In 2014, Yadav studied Ashwin, and the latter helped him with a few techniques, which probably had helped him to produce one of his best Ranji Trophy seasons. He ended the season with 33 wickets including four fifers. He also had 330 runs with 2 fifties. His best performance came against Saurashtra where he had 7, 6 wickets in two innings. He caught the selectors’ attention, soon made his India A debut.

*
Yadav tasted a different ‘best moment of his life’ when he teamed up with his cricket crush Sehwag. Now, Sehwag was a universal crush among the cricket lovers when he was at a full flow. Sehwag had a huge impact on Yadav while growing. Years later, he wouldn’t have imagined sharing a dressing room with him.

Sehwag had recently moved to Haryana. Feroz Shah Kotla had different vibes that day as Sehwag was playing against Delhi. There was a huge turn up to see the man anyway. The fans got what they had wanted, Sehwag scored 37, and then a fifty but Delhi went on to win the match. While Delhi overpowered the visitors, Yadav showed a glimpse of form too. Soon, Sehwag promoted him to number four in the next match which was against Karnataka.

As a result, Yadav got to his 2nd first-class hundred and went on to share an excellent partnership with his cricket crush, who scored a ton too. He also went to pick 2 and 6 wickets in that match.

*
Rahul Dravid who took over the India A and Under-19 teams noticed Yadav and soon after India A’s tour to Australia, Yadav earned everyone’s trust. Yadav, while having a good series with the ball, impressed everyone with his courage and batting skills. He was facing a good bowling attack in Australia, and he showed some good resistance in the series. He made 11*, 46 and 28 while batting lower down the order. However, what stood out was the time he came into bat. 196/6, 90/6, 43/5. He batted for 35, 75 and 69 deliveries. In fact, he was the top-scorer for the team when he made 46.

This earned him a ticket to the Indian senior team but before that, Delhi Daredevils(now Capitals) bought him for their 2015 season.

In 2016, Yadav made his ODI debut in the match against New Zealand where he bowled only one over(as Amit Mishra’s fifer and Axar Patel’s 2 wickets finished off the match) and grabbed a wicket, dismissed Corey Anderson. The highlight of the match was, Yadav apologizing to his mother during BCCI’s interview.

Here’s the story- India went on to wear the names of their mother on the back of their jersey for the match. Yadav wanted names of both his mother and his step-mother on his jersey, but due to some mix up, they didn’t add the name of his step-mother. Yadav, on screens, apologized to her and said that she is always there in his heart.

*
Days later, he got into the Test team that hosted England. After impressing everyone with the ball, Yadav scored two cameos in the first Test. An eventful debut. His 2nd Test was even better, thanks to a brilliant partnership with Jadeja, Yadav got to his first fifty. To make it even more memorable, he produced a rescue act along with Virat Kohli in the 3rd Test, became the first Indian cricketer to score a ton while batting at number 9 in men’s Test. He made 104 in that innings.

After an unforgettable tour, he had a free fall in the 1st Test against Australia in 2017. He took only two wickets and failed with the bat. Lesser did he know that it would be the last Test before being dropped from the playing XI. Been years now, he couldn’t get back. With the brilliance bench strength of the team, it is not going to be an easy task for him now. However, he is still positive.

After that horrible Test, he allowed the pressure to get to him. Thankfully, he realized it soon. While he was ready to go all-in, a stress fracture to his finger made everything worse. He was out for a year as the injury took time to heal. Even when he was fully fit, he wasn’t match fit to bowl continuously in a first-class match. This means he had to take more time had to miss out 2017/2018. This is exactly the time when India began to rebuild their bowling line-up, and now, the team has moved on.

Years later, Wankhede still holds a special place in Yadav’s heart, now not only for the ton, for a different reason as well. He was traded from Delhi to Mumbai in 2019 IPL. Despite being super talented, Yadav was over-shadowed by the number of spinners in Delhi line-up at that time. Mumbai took him under their wing and made his role very clear. Though he had to sit out for most of the seasons, Yadav was given the opportunity whenever the conditions suited him. He knew he would be making guest appearances in the line-up and wanted to make it fruitful.

In 2019 qualifier 1, he went on to remove Suresh Raina to give Mumbai a good push. The team then went on to win the match with ease.

In 2020 season, both his appearance came against his former team. First one was a league match, but the next one was the final. In the latter, Yadav dismissed the team’s leading run-scorer, Shikhar Dhawan, early and ended with 1 for 25.

Currently, he is one of the reasons for Haryana’s success in the ongoing Syed Mushtaq Ali Trophy. Yadav has picked up seven wickets so far from his five outings with an economy rate of six.

With hopes of getting back into the team, Yadav is not pushing it but is enjoying whatever coming in his way and is grateful.

An ode to Kallis!

Kings XI Punjab to be renamed as Punjab Kings