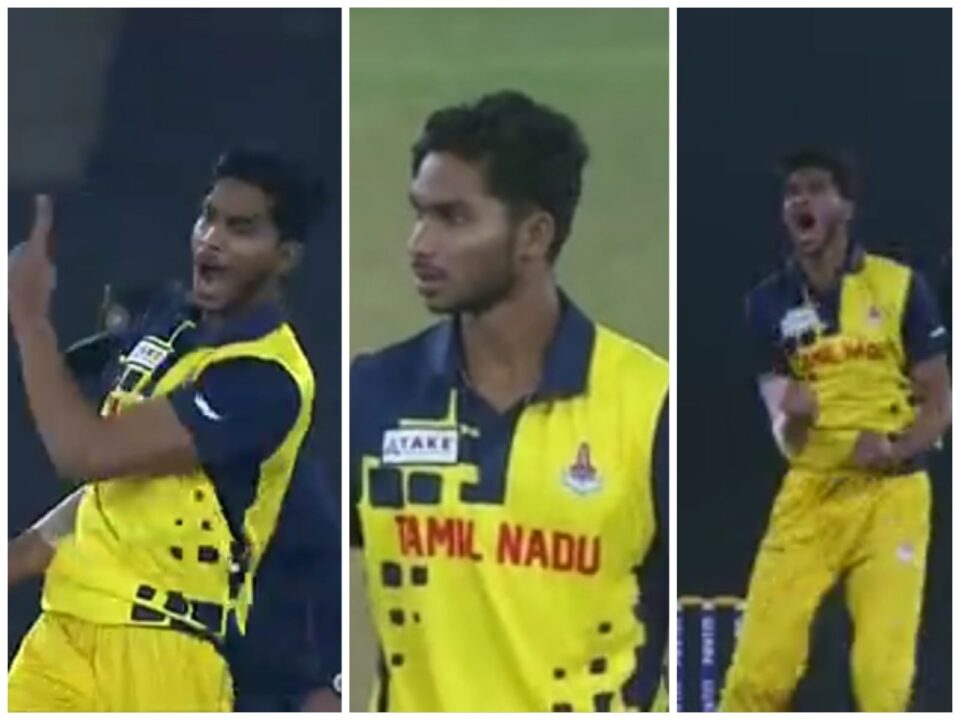 Dinesh Karthik might not be the bestest when it comes to the captaincy with the Kolkata Knight Riders. He, in fact, had stepped down from the role during the mid-season of the recently concluded IPL. Karthik was supposed to fail here at the Syed Mushtaq Ali trophy too but he had other ideas and had decided to rewrite the history books and went on to win the trophy with Tamil Nadu for the 2nd time.

Though Karthik missed his main bowlers who are/were in national duty, he didn’t have to worry because of the options he had here and he just went ahead with the players based on the conditions. The team took on Baroda on a turning wicket. Enter Siddharth. The youngster was playing his first match but he cannot afford to make a single mistake because it’s the final.

He certainly was nervous and the first delivery was a no-ball. Not the ideal start. Siddharth, however, came back immediately with a bowled in the free-hit. Of course, Solanki was not-out but that’s a good sign for Siddharth. It didn’t last long though. He bowled wide to the skipper Devdhar who swung his bat, got the outer and the ball ran to the boundary. He then played an excellent cover drive for yet another four. When everything was going fine for Devdhar, he pushed a delivery straight into the hands of Jagadeesan. It wasn’t the best of deliveries but Siddharth and TN would take it.

In the next over, Siddharth bowled pretty well and managed to keep it simple. A couple of deliveries into the over which were more of traditional spin bowling deliveries, Siddarth came up with a beautiful arm-ball to dismiss Smit Patel. The latter was deceived by the pace and the conditions and got his leg before the wicket. Probably, the best delivery to a good batter.

A few overs later, Siddharth came back. This time, Baroda had lost four wickets already. Siddharth once again changed the pace, kept the line straight which deceived Rajput. He ended up giving a return catch to Siddharth who is too good to miss something like this.

Siddharth then tried to experiment a few deliveries. He brought a slip in and two dot balls later, he gave the width and the pace for Kakhade to glide the delivery for a boundary. Now, Karthik wasn’t happy. He then shouts at Siddharth to bowl a similar delivery, a little bit closer to the batter and they ended up moving the slip a bit wider. Siddharth bowls a similar delivery but a bit closer this time, Kakhade played it through, inside edge onto his stump. Siddharth then ended up with 4-20. Mind you, he gave 11 runs in his first over.

This isn’t the first time Siddharth is pulling off something like this. His T20 debut came against Mumbai in 2019. He replaced injured Murali Vijay during the mid-way of the tournament, leaving everyone surprised but Siddharth went home with 4 for 16, dismissing Prithvi Shaw, Shreyas Iyer, Suryakumar Yadav and Siddhesh Lad. His first wicket for TN was Suryakumar Yadav’s. The pitch was a turner and the team went ahead with him instead of bringing another batter into the squad.

In some ways, Siddharth became the secret weapon for his team and he unleashes whenever his team needs him to.

Indonesia was the first place to witness Siddharth’s cricket. His father was a cricketer and Siddharth was inspired by him and played the game for fun. Soon, his father realized that the kid was good and the family shifted to India for better training.

He began the game for fun and never thought of having a career in sports. He wanted to be a batter at first but then he found that bowling was his thing. Soon, he wanted to become a pacer but one of his coaches helped him to find the spinner in him and things changed since then.

V Suresh is a well-known name and his academy has a huge following. The former SBI player took him under his wing when he was seven (just like he does for every other student) and saw him through the age cricket.

At 11, Siddharth was playing in TNCA league matches and went on to represent the state in other age group cricket. In 2013-2014, he won the TNCA’s C Subramaniam Trophy for the School Cricketer of the year.

Soon, in 2017-18, Siddharth went on to grab 52 wickets in the TNCA 1st division and then followed it up with 43 wickets while playing for Alwarpet CC. Months later, he made a move to Grand Slam. In 2017-2018, he was picked up by Chennai Super Ghillies where he went on to play only one match and then was retained for the next season.

In the Under-23 tournament, he had 15 wickets from 8 matches. One of the tournaments that helped people to take notice.

What followed for the surprise inclusion in the SMAT where he had picked five matches and had picked up 12 wickets to end up with an economy rate of 4.94.

Right after his brilliance against Mumbai, he was invited for a trial by Sunrisers Hyderabad. Soon, during the auction day, he was playing a Ranji Trophy game. Soon, he came back to the room, took a shower and had no idea that his name had popped and KKR picked him up for 20 Lakhs. He was informed about the same by his friends and of course, it is one of his biggest days in life.

Though he didn’t get an opportunity there, he certainly had a lot of things to learn from the training. Now that he has been released by the team, the management might rethink their decision after watching how he went during final. If not for KKR, there will be other teams who certainly will be keen to get him on board.

For 22YO Siddharth, this is just a beginning and he is in the right path.

Don’t see any reason why he should stop: CSK CEO on Dhoni’s future