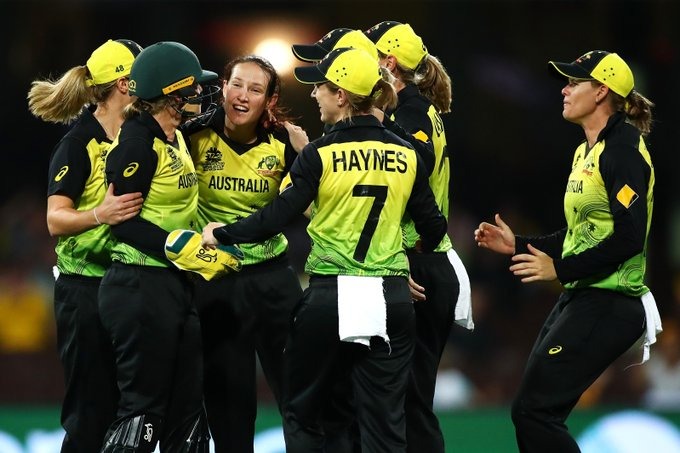 Australia knows how to win matches, don’t they?

It was yet another day you got to feel for South Africa who certainly did put on a great show to come this far. They stood unbeaten in the group stage and was a few moments away from the victory. Unfortunately, the luck was with the Australian team as the semifinal did not get washed out. Also, they batted on a better surface than South Africa.

Batting first, Perry less Australia did struggle, blame the weather. However, the team had partnerships and the players had starts to take the team to 135 in their 20 overs.

The rain started to pour right after the first innings and the match was reduced to 13 overs. South Africa’s target was 98.

It was a tricky one considering the weather. Still, the team tried to put on a huge fight.

A few days ago, White Ferns captain Sophie Devine told the press how much she hates Schutt because she is too good. Today was once again the same situation as Schutt starred with the ball, picking up two wickets early. Other bowlers chipped in to keep things tight.

It was Wolwaardt who made things tougher for Australia and gave hope for the visitors. She had two sixes and three fours to her name. She showed what she is capable of by scoring an unbeaten 41 off 27. However, it wasn’t enough as the team fell five runs short of the total.

Meg Lanning who normally likes to scores big in the knockouts once again won the player of the match award.

Lanning now has played in 12 T20I matches in knockouts and has 459 runs at an average of 51. She also has three fifties in the knockouts.

Well, both Kaur and Lanning got what they wished for, to face each other in the finals. Can Australia defend their trophy? Can India put yet another trick from their hat? March 8th will have all the answers.