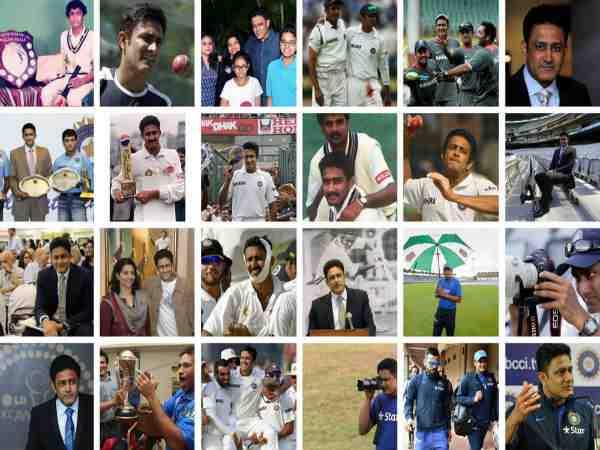 It was the first Test win for India since 1980, but the headlines went to Anil Kumble.
The leg-spinner became only the second bowler after English off-spinner Jim Laker in 1956 to pick 10 wickets in an innings.

After losing the first Test at Chepauk by 12 runs, India was pushed to a must-win situation at Feroz Shah Kotla. Thanks to solid batting performances, the home side put on a good fight to provide Pakistan, a hefty target of 420.

Needing only a draw to wrap the series, The Pakistan openers with a 101-run partnership gave a slight chance for India to win the Test.
Kumble, who bowled only four overs before lunch on the fourth day morning, came from the other end.

Kumble’s first victim -Shahid Afridi was caught behind pecking outside off stump and there started his slide. In the next ball, Kumble trapped Ijaz Ahmed lbw as he stretched forward. Inzamam-ul-Haq avoided the hat-trick, but moments later, he played on off inside edge. Mohammad Yousuf (then Yousuf Youhana) was lbw pushing forward. Moin Khan was caught low down in the slips. Saeed Anwar, who stood there defending for more than two hours, was caught bat-pad at short leg.
Pakistan collapsed to 128 for six, and Kumble took six for 15 in 44 deliveries.

Salim Malik and Wasim Akram defended firmly adding 58, making Kumble wait for his 7th. Malik later tried to pull but was bowled. Mushtaq Ahmed was caught at gully off an awkward bounce. Saqlain Mushtaq trapped in front of the wicket. With only one wicket left, Skipper Azharuddin privately instructed Srinath to bowl away from the stumps.

Kumble came back for his 27th. Three balls later- Wasim Akram who defended for one and half hour, thwarting the hat-trick in that over, top-edged one to Laxman. There it was, the ten wickets for the man!

If not the fielders supported, If not Srinath pushed that one over away, probably this wouldn’t have happened.

Kumble was carried back to the pavilion on his teammates’ shoulders as the crowd exulted. “My first reaction is that we have won. No one dreams of taking ten wickets in an innings because you can’t. The pitch was of variable bounce, and cutting and pulling was not easy. All I had to do was pitch in the right area, mix up my pace and spin, and trap the batsmen. The first wicket was the hardest to get – the openers were cruising,” He said.

After the fall of first six wickets- “That was the moment when I thought all ten could be mine,” He added that the match award should have gone to a batsman in those conditions.

The rest was history, for Kumble, and also for Richard Stokes, a 53-year-old English businessman.

As a schoolboy, he had seen Jim Laker take some of his ten wickets at Old Trafford in 1956, and he arrived at Feroz Shah Kotla – on his birthday – just in time to see Kumble repeat the feat.

An ode to Kallis!

Smith ruled out of Headingley Test

Was not expecting it: Varun Chakravarthy on India call-up