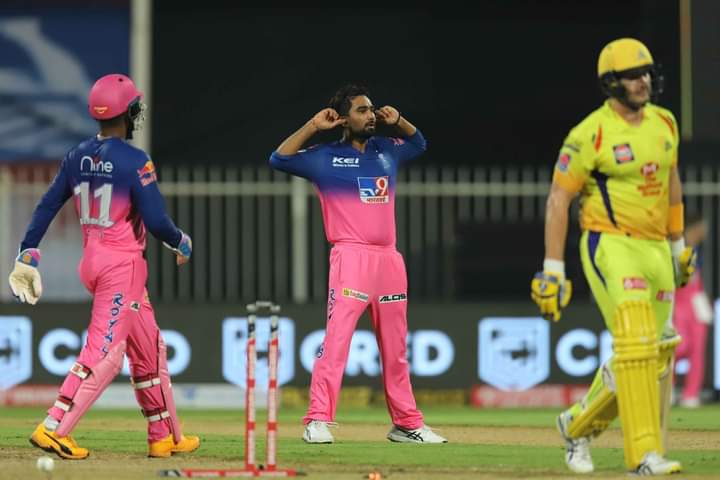 Rahul Tewatia is a busy operator. You can find him on grounds on literally every single day. Grinding to perfect his bowling. Of course, there will be times he gets tired. No, he doesn’t take rest, but would go on to swing his bat, keeps hitting those big shots. That’s how he works. If you don’t find him on the field, it is probably a ManU match day. You can see him rant about it all day long.

Coming from Sihi village in Haryana, he was inspired by his uncle to take up the sport. He soon made noises with his all-round skills and made it to the domestic team.

Tewatia learnt from two of the biggest coaches in the state, Rajiv Yadav and Vijay Yadav then the famous Jithin Babu. Some good performances means, he had a call-up for the Haryana’s 2013-2014 Ranji Trophy team. It was initially not his cup of tea, but the limited-overs were.

Good works, words and hype around him caught the eye of the Royals’ selectors, and he was roped in for his base price in 2014. Now, the Royals has a brief history of bringing talents from nowhere. They even won a trophy with these youngsters. Tewatia was one of them. He debuted against KKR but it did not go well. In the next two matches he played, he made it up by picking two wickets and ended the tournament with an economy rate of 6.55.

2017 was a big year in his career. He made his List-A debut, he was a part of KXIP line-up, got a few matches and ended up with three wickets with an economy rate of 5.44 from his 3 matches.

2018 it was. A great year. He had his name on both fronts. He was disciplined, was among the wickets and had a few cameos that changed the course of the game. At that time, he was a part of Delhi Capitals.

There was this huge craziness for legspinners in 2017-2018. Everybody became one, everybody wanted a piece of it, every team wanted to sound pretty and probably, there was some fear of missing out that made a spot open up for a legspinner in the team.

Before 2017-2018, it was literally a sin to be a legspinner. Not many preferred it, not many liked it, not many wanted to have it. It was a problem but all of a sudden this craziness unearthed spots. Tewatia, who was an expert by that time, found his way in KXIP then DC. In 2018, he played 8 matches, picked up 6 wickets with an economy rate under 8.

In 2019, legspinners became just too common that Tewatia had to sit out again. He played in 5 matches, picked up 2 wickets at an economy rate of 6.63. In 2019, things were different for him. He travelled around the country, played in different T20 leagues and by then, he was already a big name in Haryana.

One of his memorable knocks in recent times was his unbeaten 66-ball 104 in the Vishnu Prasad Chaturvedi Memorial Tournament. He also had 2 wickets in that match.

Today it was more of a homecoming for him. It took him six years to come back to this place where everything began.

CSK was under terrible trouble. Tewatia was bowling well. He was inviting the batters by bowling short. Watson and Vijay had three singles in that over. They cannot afford to play this way. They needed a big shot. Tewatia knew it. He read the mind of Watson who was all set to launch one. Tewatia pressed this one. The ball was short but not short enough for Watson. The ball went on to push the bails after hitting the pads of Watson. Wicket 1.

Curran came in at number 4 with a job. The job was to take on the spinners and score as much as he can. Curran knows to play the game well, but he chooses to play it this way. See it-Hit it. He did the same to get to 17 from 5 deliveries.

Tewatia is too good to allow the batters to enter his mind. He is clever when it comes to the intimation. He flights the ball slower than Curran expected. The latter was halfway down already and had no say. As the ball went wider, all Curran could do was to see Samson dislodging the bails. Wicket 2.

Mind games can be brutal that allows you to do things you are not usually fond of. Poor Ruturaj Gaikwad fell for that prey. He had scoreboard pressure when he walked in. 13+ runs per over means you don’t get time to settle. Ruturaj took it to his head. Nervous too, of course.

Tewatia wanted to play with his fear and his desire. In between risk and reward, Ruturaj lost himself to Tewatia who bowled a wide delivery, completely out of reach for Ruturaj who was dancing down the pitch. Wicket 3.

As expected, he brought out his signature celebration move. You are not going to like it if you are seeing it for the first time and if you are a supporter of the Yellove.

Now, we might not see Tewatia more often in this tournament. Poor wicketless performance can send him back to the bench. He might fade away just like every single year but he will go back, break the doors of the selectors and will come back. Mind you, he is just 27.

Talks: Where were you when India lifted the World Cup?

‘Haynes is the unsung hero of the Australian team’