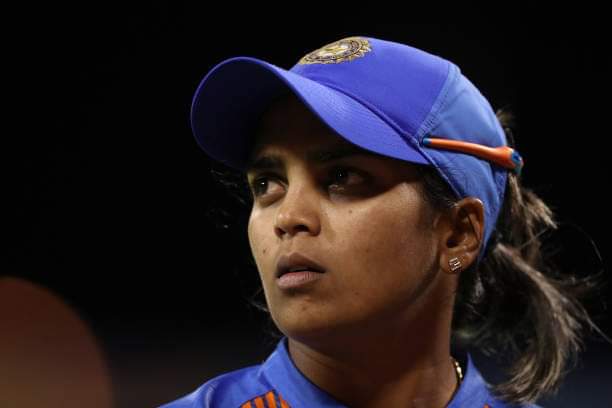 I was young when I read about Veda Krishnamurthy for the first time. There was this small paper coverage that told that she is one of the players to watch for and she was a brilliant athlete. Since I’m emotionally attached to the game, I was curious to know about her and watch her perform.

While I couldn’t watch her debut match, I remember seeing a picture of her playing cover drive in those dark blue Indian jersey. I was glad to find out that he made fifty on her debut. Though India lost that match, I was glad that she could live up to all the expectations that day.

While I tried my best to see what she was up to, one match I could remember is her performance against England in 2012. This time, her name was in the bowlers’ column. She was among the wickets. Of course, I would take it.

Now, Women do not have a lot of matches like the men’s team do. We are still developing in that place and don’t get me started on the broadcast. Most of the matches were not telecasted and I didn’t have a subscription to watch the other matches that were telecasted. Internet and social media wasn’t a great thing for me at that time and I had to wait for newspapers- those tiny clippings- to see what the team was up to. It was difficult, in a way.

I used to wait for the squad announcement, (of course, then playing XI), it was news sometimes, it was papers. If I’m not wrong, she didn’t play the whole of 2013 and in 2014, she had two to three T20I matches. She didn’t make a comeback to the team until 2015.

After waiting for years, I finally had an opportunity to watch her live for the first time and it came against my favourite team the White Ferns. She had a 60+ score in one of the matches. From that match, one shot I remember well was her cover drive off Sophie Devine’s bowling. Since then, I made sure to watch almost all her matches that was on Television.

2017 was a big year for Indian women’s team and that knock against New Zealand in the World Cup still is one of my favourites. While I badly wanted her to take India home that day, it didn’t happen. It did hurt.

Of course, I’m emotionally involved with the game and I used to pray for her to well. There was a fair share of ups and downs. She did have to go through failures and disappointments. It did hurt and yes, let me not get there. At the end of the day, I was glad to watch her play and in a way, grow up with her.

Thankfully, today, we have telecast for most of the matches and social media makes it easier to check about her. I have this crazy list of favourites. I keep myself up to date on their news. She easily tops the list along with a few other people.

She is like this household name in my family and my mother is also a crazy fan of her and there are days where we used to sit and talk about her journey, matches.

I know I’m blabbering here but I just couldn’t find right words. Maybe, someday, when I meet her, I will find the right words to tell her how I grew up watching her closely and how much she means to me.

IndVsSA: Yet another Virat Kohli masterclass in display at Mohali