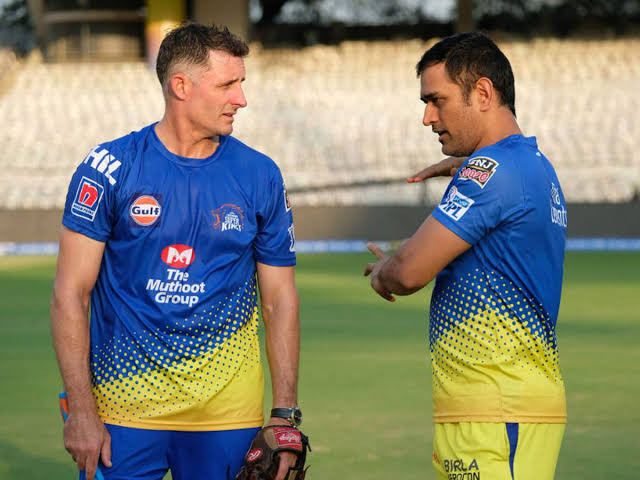 Mike Hussey in a recent podcast said that he thought his coaching career was over when his plan slightly backfired for MS Dhoni.

It was during the 2018 IPL, 1st qualifier where Chennai Super Kings took on Sunrisers Hyderabad.

The night before the match, Hussey got an interesting insight on Rashid Khan’s bowling from the video analyst.

Despite it was last minute, Hussey thought that the players could use it and if he didn’t pass on the information, he felt that he would regret it forever.

When he told about the same, players like Faf Du Plessis was impressed but as usual MS Dhoni was unmoved.

“The night before the qualifying final against Sunrisers Hyderabad, he (the analyst) sent me this split-screen of Rashid Khan,” Hussey said on the Lessons Learnt with the Greats podcast.

“When he (Rashid) runs in to bowl, when he bowls his leg-spinner, he holds his finger wide as he’s running in, and when he bowls a wrong ‘un, (he bowls) with fingers like this. And I thought – ‘Woah, this is good, but I am not sure if I should be throwing this out to the batsmen the night before this massive qualifying final’. So, I am sitting on this information, and I am going back and forth – ‘Should I, should I not, would I want it’.

“And I said to myself – If we play this game tomorrow and lose, and Rashid Khan goes really well, and I have sat on this info and I haven’t sent it out, I am not going to forgive myself. So, I decided to send it out to all the batsmen. But I did make sure I wrote: ‘You may want to use this, you may not. It is just here for your information. If you want anything, go for it, if not.

“Some of the guys loved it. Faf (du Plessis) loves this kind of stuff – he wants to know how many slower balls Bhuvneshwar Kumar’s going to bowl in the first six overs, he wants to know all the different grips and everything. But there are other players who probably don’t want to use it. Anyway, I sent it out to all batsmen,” he said.

“MS, you didn’t really hear a reply (from), which is generally normal. We come to the game, we’re playing it and we’re in big trouble and MS is in the middle, and while he’s in the middle, we’re still thinking there’s a chance to win this game,” Hussey said.

Hussey thought that his career was over when Dhoni said that he will bat his own way.

“Rashid Khan comes on to bowl, one of the very first balls he (Dhoni) faces, goes for the big cover drive – wrong ‘un, bowled through the gate. And I’m thinking ‘Uh, gosh. Okay, no worries.’ And MS walks straight off the field, and I am sitting in the dugout and he walks straight up to me and says ‘I’ll bat my own way, thanks,’ and sits back down,” Hussey said further.

“As a coach, I thought my days are over forever! But, to MS’s credit, after the game, he was absolutely fantastic. He came up and spoke to me and we had a good chat. He said that the information was correct, but for him, he needed time to go away and process it and practise it.

“What he did in the game was, he thought he saw it was going to be a leg-spinner, played a shot, didn’t bother watching the bowl, and obviously he was done through the gate with the wrong ‘un. He said ‘If I had got time in the nets, have a look at the hand as he was running in to bowl, then still watch the ball then I would have time to build it into the routine. And it would have been very beneficial.’”